House of the Dragon has become one of the most popular shows on HBO, and this Game of Thrones prequel has now achieved a huge honor after releasing its second episode.

House of the Dragon kicked off with a huge viewership number. In fact, the 10 million people that watched the season premiere made it the biggest opening in HBO history. Well, now the second episode has come out and added yet another record to this Game of the Thrones prequel. The viewership jumped up by 2%, making it 10.2 million household views, becoming even bigger than when the premiere episode was relesaed. Usually, there is a dropoff in viewership that can occur after a big premiere, but House of the Dragon has not seen that drop off yet. Surprisingly, the viewership has gone up.

House of the Dragon has clearly become popular among new fans, and those who were loyal Game of Thrones watchers. On Friday, the premiere episode of the spinoff series reached 20 million views, with that number now coming close to 25 million. Euphoria had become the second-biggest watched HBO series in the history of the network back in February, which might mean that the trajectory of House of the Dragon could propel it past Euphoria, and possibly past Game of Thrones altogether. So far, House of the Dragon’s first two episodes has surpassed any individual episode that Euphoria has released. The second season finale of Euphoria was the biggest with 6.4 million households watched.

It’s no surprise that a series based on Game of Thrones would be this popular, but no one thought that House of the Dragon would already be at his level. Mainly, because the last season of Game of Thrones was disliked too much. Granted, it has been a few years since the end of that series happened, so maybe people just forget how bad it was. Either way, fans are clearly flocking back to the land of Westeros to see a feuding family attempt to take one another down for the sake of sitting on the Iron Throne. The battle for the throne is what made the original series so good, but this time we get that same battle while being able to see dragons used as war tools. Ok, Daenerys had dragons, but hers pale in comparison to the reported 22 we will see in this new prequel series.

House of the Dragon follows House Targaryen, and the family’s aims to conquer the Iron Throne. When King Viserys is without an heir, he must choose one, leading him to break years of tradition. Plenty of the members of House Targaryen want the throne, and it will lead to the family taking one another out to feed their greed for ruling the seven kingdoms. There is meant to be an event called the Dance of Dragons, which we can assume has to do with a massive dragon fight. We can’t wait to see it.

House of the Dragon has already been renewed for a second season, and the first has only yet begun. The first two episodes can be viewed on HBO Max, and the third will be premiering on Sunday. The episodes get released on HBO first, then can be streamed on HBO Max. This new prequel series has reignited many people’s love for drama and betrayal, and we also can’t wait to see what happens next. 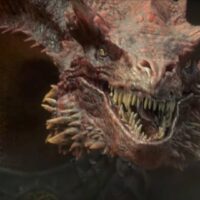