Matthew McConaughey has rarely been so wildly miscast as in this grim fantasy movie now available for streaming.

Matthew McConaughey is most known for playing gently Southern, slyly charming characters. He first came to prominence by turning what was a clearly predatory scuzzball on paper into a guy you’d want to want to get a drink with in Dazed and Confused, and has often played variations on that theme. It could be a slightly sleazy lawyer turned righteous in the legal thriller A Time to Kill or a criminal white boy named Rick in White Boy Rick, but they all have something in common: that Matthew McConaughey charm. However, the future Academy Award-winner decided to stretch his range for a gritty science fiction/ fantasy movie released in 2002 and portray a character utterly without the characteristics that made him famous. That movie is Reign of Fire, co-starring Christian Bale and a bunch of dragons, and it is currently streaming on Hulu.

Before we go into whatever possessed Matthew McConaughey to star in Reign of Fire, it is worth examining what was hitting the box office in 2002. The top-grossing movies of the year were The Lord of the Rings: The Two Towers and Harry Potter and the Chamber of Secrets, so fantasy films were clearly a potential hit. The first Sam Raimi Spider-Man movie was breaking new ground for comic book adaptations, Star Wars: Attack of the Clones was disappointing fans while making money hand over fist, and Men in Black II was testing the limits of Johnny Knoxville’s appeal. Into this crowded field went Matthew McConaughey and Christian Bale to fight dragons in a post-apocalyptic London.

To give Reign of Fire its fair due, it is at the very least, an original notion. The movie begins in then-present London, as a subway construction unearths a dragon that has been hibernating below the surface of the Earth for millions of years. A young boy named Quinn Abercromby (possibly the most British name ever) witnesses his mother killed by the emergence of the dragon and grows up to be Christian Bale. A quick voice-over exposition dump by Bale explains that this one dragon led to millions more, which led to the use of nuclear weapons in a failed attempt to combat them, and the near-extinction of the human race. Christian Bale, his best friend Gerard Butler, and a collection of others grind out a meager existence in ​​Bamburgh Castle, far from the central dragons’ nest of London, until Matthew McConaughey shows up as the gravel-voiced, bearded, and frequently shirtless leader of a band of dragon-killing Kentucky militiamen.

Matthew McConaughey plays the fanatical dragon-slayer ​​Denton Van Zan (another awesome name) with a lack of humor that completely misunderstands his central appeal. The role would be perfect for a bulkily-framed actor less capable of nuance and charm, like co-star Gerard Butler or then-emerging star Vin Diesel, but Matthew McConaughey is hopelessly miscast. That is not to say he does not give it his all. Van Zan is full of outsized intensity and monologues on the death of the winged beasts, and to his credit, Matthew McConaughey commits. Christian Bale has a slightly more layered role as the leader of a community of survivors, understandably reluctant to strike back at the dragons in a suicide mission after seeing the fall of civilization due to fire-breathing monsters. He also is sporting a bearded, unkempt look identical to how he would play Bruce Wayne in training a few years later in Batman Begins, so at least some good came of Reign of Fire.

Reign of Fire is the kind of movie that asks you to buy into the central premise and not ask too many questions, which is not necessarily a bad thing. Dragons fighting desperate human survivors in a burning world of ruins is actually a good central image, but then the film keeps burdening it with unnecessary pseudo-science that makes you think harder about the flimsy logic of the story. Christian Bale’s exposition dump posits that the dragons actually killed off the dinosaurs and the ensuing amount of ash produced caused the ice age. That has nothing to do with the actual plot of the movie, but you are then stuck with the idea that these animals (which Matthew McConaughey and the movie itself take repeated care to emphasize they are, as supposed to magical creatures), hunted multiple species of dinosaurs to extinction, which is not something that is at all typical of animals in a biosystem other than humans. The movie also hinges on the idea that of millions of dragons, there is a single male that is responsible for all breeding, so killing him destroys them all, Horcrux-style. That does not seem like an evolutionarily sound breeding strategy.

Matthew McConaughey would spend several years after Reign of Fire appearing in dreck like How to Lose a Guy in 10 Days, Sahara, and Ghosts of Girlfriends Past before reinventing himself in the now-legendary McConaissance. Christian Bale starred in the equally bewildering, high-concept flop Equilibrium in 2002, but would soon team up with Christopher Nolan for the colossal success of the Dark Knight trilogy. Reign of Fire flopped at the box office, pulling in $82 million against a $60 million budget, and currently holds a surprisingly generous 42% on Rotten Tomatoes. Perhaps someday, we will get the post-apocalyptic dragon adventure audiences deserve, but it was not this one. 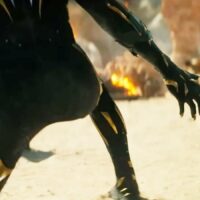