This is pretty spectacular! Argo Medical Technologies is developing a new robotic device, called the ReWalk, to help paraplegics walk, stand, sit, and even climb stairs again. A woman from London, England had already used it to complete a full marathon. This new device has been in use in Europe and Israel, and now is looking to come to several U.S. rehabilitation centers, pending FDA approval. 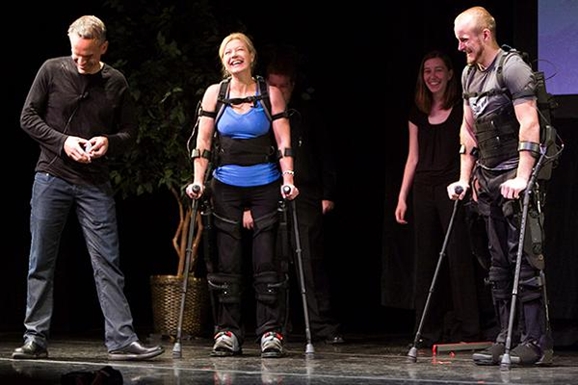 According to VentureBeat.com, the ReWalk 2.0 is a robotic device that connects to a paraplegic’s waist and legs, helping them get around without the need of a wheelchair. Over 100 people in Europe and Israel use the ReWalk, and now it looks like it might come to the U.S. in the second half of 2013. Once in the States, ReWalk Rehabilitation would help patients in 22 rehabilitation centers across the country.

Israeli electrical engineer Dr. Amit Gopher developed and designed the ReWalk Rehabilitation suit after becoming quadriplegic following an accident in 1997. The device helps paraplegics without excessive strain to their muscles and bodies. “It was extremely tiring for an individual to take 10 or 15 steps. A key element of the ReWalk design was that the energy requirements of the user should be no different from that of someone who was not injured,” says Argo Medical Technologies CEO Larry Jasinski.

The robotic exoskeleton connects to a person’s legs and waist and uses their sense of balance to maneuver the machine almost like a Segway. The device’s motion sensor can detect a very small movement and send signals to the bionic legs to successfully move the person in a natural state of walking. Attached is a backpack that houses the ReWalk’s battery supply and software, which includes a safety feature that detects if you’re about to fall. Although the person must use crutches, they’re purely for balance reasons.

ReWalk Rehabilitation 2.0 can be adjusted for people of various shapes, sizes, and heights, and has a “beginner” mode so the robotic device can learn your movements. The patient must learn and practice how to use the ReWalk in an average of 15 sessions.

The ReWalk is a bit on the pricey side, about an estimated $65,000 once it comes to the U.S. But Jasinski states that, when compared to the overall cost of care, the difference is considerable. “We believe that the health impact will more than pay for the cost of this device,” as the patients use the ReWalk as a form of rehabilitation.

Watch the video below to see ReWalk Rehabilitation 2.0 in action. It’s inspiring!