NASA scientists are doing the impossible and creating pure oxygen on the planet Mars, out of practically nothing.

Mankind has long had a fascination with our neighboring planet Mars. Science fiction is full of countless stories about aliens invading from Mars or humans doing the reverse and colonizing the red planet or even Santa Claus becoming the overlord of all life there. However, there are real-world attempts to not only discover new facts about Mars and its potential to sustain life, but to actually make that possible. Specifically, the Mars 2020 Perseverance mission brought a device to the planet that can actually make oxygen out of basically nothing.

That is slight hyperbole, as the researchers at NASA are people of science, not wizards. The device that Perseverance brought to Mars is known as MOXIE (which stands for Mars Oxygen In-Situ Resource Utilization Experiment). It is a small, toaster-sized machine coated with gold, which helps shield it from the intense heat that it uses to make oxygen. According to CNET, what MOXIE does is take carbon dioxide molecules and turn them into oxygen. As the name suggests, a carbon dioxide molecule is composed of three atoms bound together: one carbon and two oxygen. Essentially, MOXIE separates the molecule bonds, leaving the oxygen floating free into the atmosphere.

Fortunately for MOXIE, Mars has an atmosphere that is 96% carbon dioxide (compared to Earth’s, which is about 78% nitrogen, 21% oxygen, and a bunch of other assorted gases), giving it a lot to work with. The fact that Mars has an atmosphere at all is one of the things that makes it fascinating for people with a dream of planetary terraforming, but there needs to be an appropriate ratio of gases in order for humans to survive there. NASA has long held plans to send astronauts to Mars, which naturally requires them to have oxygen to breathe. The cost of transporting oxygen to Mars and the fuel that was necessary to move tanks of it across the planetary gulf is staggering to consider, so NASA is basically thinking, why not just make it there?

In one sense, this is completely theoretical. As it is, MOXIE currently produces oxygen at the rate as one tree does on Earth (nature’s own moxie). That is not nearly enough to sustain human life on Mars or to sufficiently change the atmosphere to make it self-sustaining in the absence of known plant life. However, it definitely, genuinely is producing oxygen, which is something. If MOXIE can be scaled up, either with a larger device or more devices, there is the possibility that Mars could support some kind of human life.

NASA has a presidential order to land a manned expedition on Mars by the year 2033. That is eleven years away, which is an astronomically short amount of time to work out all the incredibly important details that will keep Mars-bound athletes alive. Hopefully, they figure out a way for MOXIE to produce the incredible amount of oxygen that will be necessary, or maybe get a whole bunch of trees planted via remote rover in the meantime. Whatever works. 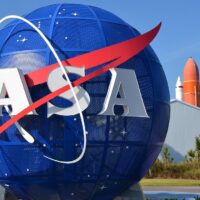 See NASA Crash A Satellite Into An Asteroid To Protect Earth