Wonder Woman 1984 has an after-credits scene as we all expect from superhero movies nowadays. Heck, we are even getting it in Star Wars television shows now. This one is a short but sweet one that gives long-time fans of the Wonder Woman character a very special treat, but it also plays into the larger story of Wonder Woman 1984 and its particular riff on the superhero’s legacy and mythology.

Of course, the Wonder Woman 1984 after-credits scene will be discussed in detail, so consider this your SPOILER WARNING.

In Wonder Woman 1984, Diana Prince reveals that she has collected together the armor of a legendary Amazonian warrior named Asteria. At the beginning of the film, we see Diana as a child participating in a gauntlet of games that are held in Asteria’s honor. Diana later tells Steve Trevor about Asteria’s history. When Zeus created Themyscira for the Amazons to live on, Asteria stayed behind to fend off the armies of men that were trying to stop them from leaving. In order to do so, the Amazonians all contributed their finest golden armor to be part of a suit that Asteria could wear against the hordes of soldiers. Because of this, Asteria was the only Amazonian to be left behind and was unable to join her sisters on Themyscira.

When the Wonder Woman 1984 after-credits scene kicks off, we see the back of a woman walking through some city street. It looks like Diana at first. A small child is in danger from a falling pole and this woman deftly saves the child from certain harm. As the child’s mother approaches the woman to thank her, she turns around and is revealed not to be Diana. Instead, she tells the woman that her name is Asteria. It looks like Asteria has been living among mortals and performing a lot of the same heroic deeds that Diana has.

But, it is not just the reveal of Asteria herself in the Wonder Woman 1984 after-credits scene that makes this such an awesome moment. Asteria is revealed to be played by actress Lynda Carter. Carter is most well-known for playing the character of Wonder Woman in the ’70s television series that helped catapult the character into the pop-culture pantheon. Casting her as Asteria and creating a backstory for the character that makes her one of Diana’s idols is a great way to pay tribute to the actress who was an enormous part in making Wonder Woman one of the most beloved superheroes of all time.

The Wonder Woman 1984 after-credits scene also has now set up the possibility that Asteria (and Lynda Carter) could make a return in Wonder Woman 3. It was always assumed that Diana was the only Amazonian who had ever left Themyscira. She says that she searched for Asteria but was only able to find her legendary golden armor. Having the two meet seems like the kind of obvious story direction this after-credits scene would put in place. Plus, it would be quite a delight for fans of the character to see the two most famous iterations of Wonder Woman meet on-screen and potentially have to conquer some threat together.

It would also be a shame if we only ever get to see Lynda Carter as Asteria in the Wonder Woman 1984 after-credits scene. Even with just a brief appearance, the actress proves she still has the charm, charisma, and star presence that helped make her such a memorable addition to the Wonder Woman franchise. The fact that she and Gal Gadot don’t get the chance to share any screen time together is a bummer, but this little teaser definitely has us hoping that it is setting up exactly that scenario for Wonder Woman 3.

Regardless, it was phenomenal to see Patty Jenkins pay tribute to Lynda Carter with her appearance in the Wonder Woman 1984 after-credits scene. Having her play a character that is admired by Diana and the Amazonians is a cool way to remind folks that she is a revered figure in the legacy of this character. If this is all we get of Lynda Carter in the Wonder Woman movies, it is a fitting sign of respect that ranks with some of the best post-credit scenes of all time. 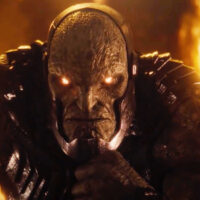 Why New Gods Is Trending

Joe Manganiello Getting A Deathstroke Series?