Neve Campbell has been having an incredible year. In January, the Canadian actress and 90s icon returned to the fictional town of Woodsboro, stepping back into the role of Sidney Prescott to take on a new Ghostface in the fifth installment of the Scream franchise. Moving things to the smaller screen, she nabbed a role in Netflix’s take on the classic book-turned-film-turned-television drama, The Lincoln Lawyer. First hitting the streaming platform on May 13, the series has quickly climbed its way to being a top watched series.

Leading The Lincoln Lawyer is Manuel Garcia-Rulfo, who stars as a defense attorney named Mickey Haller. What makes Mickey different from other lawyers is that his office is in the most unlikely of places – a Lincoln Town Car. It’s from his car that Mickey is able to clear his head and take on even the stickiest of cases. Neve Campbell plays Mickey’s now ex-wife, Maggie McPherson. Also starring are Becki Newton, Jazz Raycole, Angus Sampson, and Christopher Gorham.

The show’s premiere season sees Mickey taking on cases for those who are trapped by the system. When his peer, Jerry Vincent, is mysteriously murdered, Mickey absorbs all of the deceased attorney’s cases, including a very high profile murder trial. As the web surrounding Mickey’s big client begins to unravel, the Lincoln Lawyer will find himself caught up in a massive coverup that threatens to take not only him, but his entire family down. As for Neve Campbell’s Maggie McPherson, she’s one of two of Mickey’s ex-wives and has a child with the witty lawyer. Throughout the first season, Mickey wants to get her back, but Maggie is hesitant – to say the least.

If The Lincoln Lawyer is ringing a bell for you, that’s because you’ve most likely heard its name before. Not only is it the title of a book penned by crime author, Michael Connelly, but over a decade ago, Matthew McConaughey stepped into the role of the road bound attorney on the big screen. Like Netflix’s Mickey Haller, the film’s version also takes on clients who are down on their luck, before tackling a headline worthy case. In Beverly Hills, the son of a top dog in real estate has been brought into police headquarters under charges that he ruthlessly assaulted a sex worker. The suspect swears that he’s been set up and now Mickey must step in to track down the truth. Along with McConaughey, the film boasts an incredible lineup of performers including Ryan Phillippe, Josh Lucas, William H. Macy, Bryan Cranston, and Marisa Tomei in Neve Campbell’s role of Haller’s ex-wife, Maggie McPherson.

As for the Netflix series, it centers around Connelly’s follow-up novel, The Brass Verdict. Luckily for television and film creators, Connelly has quite an impressive list of crime based books to keep them busy in the adaptation game for a longtime. Overall, the series based interpretation which was created by David E. Kelley has received solid feedback from critics and fans – although the fans have enjoyed it more. On Rotten Tomatoes, the series sits with an 80% audience score and a 76% critics score. Although critics on the site have complained about its “quirkiness,” they still backed it up as a great series for fans of fictional courtroom dramas. And with actors like Neve Campbell and Manuel Garcia-Rulfo standing at the helm, how could anyone complain?

As for Neve Campbell, fans of the Scream world are awaiting confirmation that the butt kicking Sidney Prescott will be returning once again for the recently revealed sixth film. Although fans and critics alike were incredibly shaky on whether the fifth film would be a success without its original director, Wes Craven, newcomers, Tyler Gillett and Matt Bettinelli-Olpin knocked it out of the park. Because of this, the film got a speedy greenlight to move forward with yet another installment. With new actors set to return for the upcoming flick, fans were made aware that Scream 4 star, Hayden Panettiere would also be reprising her role. And of course, Courteney Cox will be returning as the ever witty Gale Weathers, so if Neve Campbell doesn’t sign on, we want our money back!

The good news for us is that with Neve Campbell taking on small screen roles, the sky’s the limit for what she may appear in next. While the last few years have been a bit slow for the actress (to be fair, Hollywood was severely hampered by COVID), we’re excited to see her in action as another incredibly take-no-crap woman in The Lincoln Lawyer. Now streaming on Netflix, you can check out the trailer for the criminally good series here. 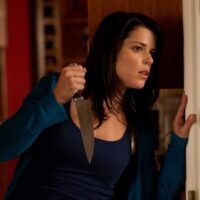