If you have seen any interviews with Emily Blunt (Sicario) and Dwayne Johnson (Hobbs & Shaw), then it is clear the two had a blast filming Jungle Cruise while being open about their friendship. Now the two are teaming up for a biopic from Amazon Studios, as reported by Deadline.

Dwayne Johnson will produce the film, which will star his co-star from the Disney blockbuster based on the Disneyland amusement park ride. He will be producing with his company Seven Bucks Productions. Hiram Garcia and Dany Garcia, in coproduction with Emily Blunt’s Ledbury Productions and Kristina Sorensen Productions. Blunt and Sorensen are producing with writer Gustin Nash (Youth in Revolt) as an executive producer.

We don’t have word on whether Dwayne Johnson will also be acting in the film, or who he will play if he does. Emily Blunt will be the centerpiece for the action-adventure flick. She will play Kate Warne, the first woman detective to work at Pinkerton Agency. Essentially, she was a real Sherlock Holmes who had to deal with the boy’s club of her industry but managed to break ground for women in law enforcement while changing the game for detectives across the board.

Jungle Cruise was the first time for Dwayne Johnson to star along with the Quiet Place actress. The film is still in theaters and on Disney Plus. It is directed by Jaume Collet-Serra (The Shallows) with writers Michael Green (Blade Runner 2049) and Bad Santa writers Glenn Ficarra and John Requa. Starring with the two leads is Jesse Plemons (Breaking Bad), Edgar Ramirez (The Undoing), Paul Giamatti (Gunpowder Milkshake), and Jack Whitehall (Good Omens). So far, it has grossed $126 million worldwide.

Two weeks ago, it was reported that Dwayne Johnson was going to have a meeting, that by now has been done, for a Jungle Cruise sequel. Ideas are bring tossed around about doing standalone sequels to expand the universe, despite the blockbuster having tied up loose ends with its conclusion. It is not confirmed to happen as the pandemic has slammed every movie’s box office performance, so whether Disney wants to pursue a sequel is up in the air.

Between their respective runs in Hollywood, Dwayne Johnson and Emily Blunt have had successful careers. Johnson has done blockbuster after blockbuster. These have included San Andreas, Rampage, and several entries of the Fast & Furious franchise with the spin-off Hobbs and Shaw. Blunt has had a wide range of roles in different sizes of films. She has been in horror with A Quiet Place and its recent sequel, action flicks like Jungle Cruise and Edge of Tomorrow, and comedies like The Devil Wears Prada and Marry Poppins Returns.

The two stars have plenty of work ahead of them outside of the Amazon Studios detective project. Dwayne Johnson is currently set to be the DC character Black Adam in his own standalone movie of the same name. He also has lined up Red Notice, DC League of Super-Pets, The King, San Andreas 2, Doc Savage, and Big Trouble in Little China. Meanwhile, Emily Blunt will star in the series The English and a dramatic film called Not Fade Away. 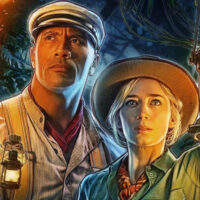