Check out Gal Gadot riding a bike down the beach while wearing a white pant suit. It's an odd combination though the setting is perfect

By David Harrison | Published 5 months ago

Gal Gadot has become one of the true movie stars these days, having taken on one of the most iconic superheroes ever on the big screen while now expanding her resume into other genres as well. And for some celebrities, making waves on social media is just as important as what’s being done on the big and small screen. Gadot seems to understand this as well with an active Instagram feed that’s garnered significant attention and engagement. Besides just the enormity of her fame, it’s also because she’ll post oddball stuff from time to time. And that was definitely the case with Gal Gadot’s latest Instagram post which had fans flocking to the platform.

In the Instagram post, Gal Gadot details three of her favorite things in the world, though one of them is clearly tongue-in-cheek. It’s a shot of her on the sand in front of a gorgeous sunset. But she’s also riding a bike and wearing an all-white power suit. Does the latter fashion choice stand in sharp contrast to everything else happening here? No doubt. But Gal Gadot seems to understand that at least, adding a wink emoji to the end to let on that she isn’t being totally series. Why she was wearing the suit and riding the bike in the first place is anyone’s guess. Likely, she just saw a chance to have a little fun with the juxtaposition. Check it out:

As of this writing, the Gal Gadot post had garnered about 563K likes on Instagram. The reaction isn’t all that surprising considering just want kind of crowd has come along for the Gal Gadot social media ride, so to speak. She has 83.7 million followers on Instagram. That puts her in the top-40 in terms of overall followers on the platform. This is rarified social media air here so it’s no surprise at all that she would have plenty of engagement for a post like this.

Gal Gadot has a number of high-profile movies currently in the works as well, some that will diverge from the Wonder Woman role that really put her on the map. She’s set to play the Evil Queen in the live-action adaptation of Disney’s Snow White which is due out next year and is currently filming. Rachel Zegler is cast in the lead role and this will almost assuredly be a massive blockbuster for the Mouse House when it hits theaters. And she’s also set to star in Irene Sendler, a biopic about the Polish nurse who helped lead parts of the underground resistance against the Nazis in World War II.

As for her biggest role, well it’s unclear when or if we will get Gal Gadot back as Diana Prince in Wonder Woman 3. Some of that had to do with director Patty Jenkins’s seeming reluctance to make this her next project. But it does look like we will get the third film at some point, though the studio hasn’t been exactly clear about the timing. In the meantime, Gal Gadot can spend her time donning suits and riding bikes down the beach. 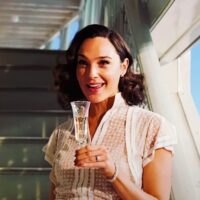 See Gal Gadot Be Goofy In A Tight Black Swimsuit

See Gal Gadot All Smiles In An Unbuttoned Blouse