The war to dominate the fast-food chicken sandwich competition is on. While Chick-fil-A has made it a primary menu item for years, chains like McDonalds, Wendy’s, and Shake Shack have all been trying new strategies to become the top choice for a chicken sandwich. How does a restaurant chain win in this situation? We’ve seen the companies shift their pricing, their ingredients, and their marketing strategies to become the top player in this game. Now, Burger King has a new strategy: compete directly with Chick-fil-A by reminding customers of the company’s anti-LGBTQ+ stances. Moreover, show that Burger King is directly supporting the LGBTQ+ community by way of their chicken sandwich. This is perhaps more straightforward as a strategy than it sounds. They managed to sum it all up in a tweet.

Below, you can see the tweet where Burger King promotes their Ch’King sandwich and throws shade a Chick-fil-A.

June is LGBTQ+ Pride month. Until June 30th, Burger King plans to donate 40 cents for every Ch’King sandwich they sell to the Human Rights Campaign, the biggest civil rights organization for the LGBTQ+ community in the United States. This in itself takes a direct swing at Chick-fil-A’s policies, since the company has a history of donating to anti-LGBTQ+ organizations. In the brief tweet, they also bring up that they’re open on Sundays, since Chick-fil-A is not. The company makes policies in alignment with the devout Christian beliefs of the owners, who do not open their restaurants on Sundays.

Why does Burger King want to break into the chicken sandwich market anyway? Aren’t they known for their burgers? Well, Americans have been shifting toward consuming less beef and replacing it with chicken during recent decades. In fact, Americans eat twice as much chicken today when compared to the 1970s. Not all of this is due to chicken sandwiches, of course. It’s represented in home made meals and chicken wings for Superbowl Sunday, but the fast food industry is pivoting toward the trend for more chicken and less beef.

Burger King created their new chicken sandwich, served on a potato bun, back in February 2021. At the time, they gave it a descriptive name on the menu: The Hand-Breaded Crispy Chicken Sandwich. They’ve since renamed it the Ch’King, making it more branded and unique to their restaurant. It’s not as simple of a name to remember as the Whopper, but they’re doing what they can.

Last month, Burger King announced another promotion for the Ch’King, where they promised to offer free Whoppers to customers who purchased a Ch’King until June 20th through their website or app. It seems that the free Whopper promotion may be coinciding with the 40 cent donation to the Human Rights Campaign until that date.

And now, of course, Burger King is taking a hit right at Chick-fil-A and their political policies that have been turning customers away over the past decade. Many people have decided to boycott Chick-fil-A over the years due to their anti-LGBTQ+ donation history (though the company did discontinue their donations to anti-LGBTQ+ organizations in recent years over backlash). Others eat there to support that exact reason. And others eat their chicken sandwiches because they enjoy them, but feel guilty about the policies they’re supporting. It’s this last group that Burger King may now be doing their best to sway to switch in their chicken sandwich habits, and it may just work to help bolster their new Ch’King sales. 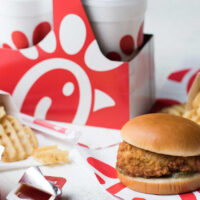