This year marks the 30th anniversary of the third and final chapter in the Star Wars original trilogy. To celebrate Return of the Jedi (AKA Star Wars: Episode VI), Lucasfilm has released a “Making of Return of the Jedi“ book and the original teaser trailer for the film, from back when they were still calling it Revenge of the Jedi. Now rare, behind-the-scene footage of the film’s production from a once-thought-lost laserdisc (remember those?) has been posted on Facebook.

The missing laserdisc was from the EditDroid editing system developed by The Droid Works, a spin-off company from Lucasfilm, in 1984. Although EditDroid would go the way of Emperor Palpatine at the end of Return of the Jedi, the editing software directly birthed other digital editing systems such as Avid and Apple’s Final Cut Pro. It was the first time that filmmakers could edit film stock digitally. The recovered Return of the Jedi laserdisc features almost 30 minutes of raw footage from the film’s production. The footage posted to Facebook includes a 59-second clip with no audio of R2-D2 repairing Luke’s X-Wing on Dagobah, a 60-second clip of Frank Oz performing as Jedi Master Yoda, and an alternate take of Luke and Yoda on Dagobah.

It’s pretty cool to watch an alternate take of Luke returning to Dagobah to meet with Master Yoda. After years of watching the original on VHS, DVD, and Blu-ray, the scene is imprinted in my mind, so watching the actors give the lines different inflections and readings is strange. Also, watching Frank Oz work his magic as Yoda will make you long for the practical effects that originally gave birth to Yoda, rather than the CGI character he would become in the prequel trilogy. Coming off the heels of the news that Lawrence Kasdan and J.J. Abrams are now writing Episode VII‘s screenplay, it’s refreshing to remember that part of loving Star Wars is watching and learning how the films were actually made. While the Return of the Jedi wasn’t the best film the original trilogy had to offer, any behind-the-scenes footage of the production will always be welcomed. The same thing can be said for the prequel trilogy too. No matter how terrible The Phantom Menace turned out, I will most likely watch anything on how the film was put together (even Jake Lloyd’s terrible audition with Natalie Portman). As we mentioned, Lucasfilm recently released the original teaser for Revenge of the Jedi. The film’s title would be later changed to Return of the Jedi because, according to George Lucas, a Jedi Knight has no use for revenge. The release of the teaser (along with an Empire Strikes Back teaser the week before) on the official Star Wars YouTube channel sparked speculation that Lucasfilm might release the teaser for Episode VII next week. J.J. Abrams has yet to shoot any footage for the film (so far as we know), but it is believed the teaser might include concept art from Episode VII, just like the Empire Strikes Back teaser. 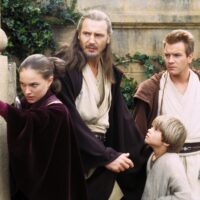