Warning: the clip below contains some salty language, so consider it NSFW.

We’re now in a time between Batmen, with Christopher Nolan and Christian Bale having wrapped up their massively successful trilogy and the mantle now being handed off to director Zack Snyder, actor Ben Affleck, and the burgeoning DC Comics Cinematic Universe. In fact, Nolan’s Bat flicks made such a massive impact that’s it’s easy to forget that, before Batman Begins came together, Warner Bros. spent years floundering around and trying to figure out what to do with the Batman franchise after Joel Schumacher, George Clooney, and Arnold Schwarzenegger killed it stone dead with 1997’s Batman & Robin. One of the more out-there ideas for a franchise resurrection was a live-action Batman Beyond movie, based on the future-set animated series that premiered in 1999. With the future of the Bat in flux, Voices From Krypton points us toward the above clip, where host Kevin Smith discusses the Batman Beyond movie that never happened with DC animation legend Paul Dini.

For those not in the loop, Batman Beyond was set several decades after Batman’s prime years of skulking around Gotham. It followed a vengeful high schooler named Terry McGinnis who crosses paths with an elderly Bruce Wayne, now living in quiet, broody solitude within the halls of Wayne Manor. Long story short, Terry argues that even this futuristic Gotham needs a Batman, and a reluctant Bruce agrees to train and serve as his mentor. Decked out in a cutting-edge prototype Batsuit, Terry sets out haunting the spires of the the Gotham mega-tropolis, punching colorful criminals in the jaw because justice.

It’s definitely a stretch to think that Warners would have really backed such an unfamiliar version of Batman as one of their flagship movie franchises, but that’s a testament to just how long Batman lingered in development hell before Christopher Nolan sent up the Batsignal with his gritty origin film. That’s not to say a live-action Batman Begins is necessarily a bad idea, but it’s definitely not a straightforward concept, and it’s easy to imagine the many, many ways it could have gone wrong.

The podcast with Dini aired nearly a year ago to the day, with filmmaker Kevin Smith and Dini starting out watching and discussing the fantastic animated film Batman Beyond: Return of the Joker. Discussion eventually turned to the live-action possibilities. If you don’t have speakers or headphones on hand at the moment, here’s the bulk of the Batman Beyond discussion. We’re leaving out the occasional digressions as they’re distracted by the movie, but you can hear the full audio up top. Here’s Dini:

Alan [Burnett] and I actually worked on a Batman Beyond live-action feature. We worked with Boaz Yakin … Boaz was talking to the folks at Warners about some projects, and he’d just directed Remember the Titans, which was a really good sports story, football story. One of the ideas that he liked was Batman Beyond … but he really wanted to work on it with Alan and myself. So we had a number of meetings, and we actually all worked on a draft together.

It was fine…it wasn’t like [Return of the Joker]. It was set in Gotham future, but it didn’t quite have the fantastic, futuristic edge. It was sort of like an amalgam, there was a little bit of Dark Knight, there was a little bit of contemporary comics, and there was Terry and the suit and everything. It was Old Bruce Wayne. So they were in it, but it was just a little bit…I dunno, for whatever reason, this was a more successful film. The first draft went in and needed some work, then basically everybody decided it was better, rather than spend a lot of time on this, let’s just table it.

Ironically enough, Dini says he and Burnett stuck around and pitched ideas for a traditional live-action Batman movie afterwards, including the idea of featuring villain Ra’s al Ghul — who played a major part in Nolan’s trilogy — and then even discussing the idea of a Batman vs. Superman movie — essentially what’s now happening with Zack Snyder’s Man of Steel 2. Somebody should hire these guys to forecast the future of the DC Cinematic Universe for the next decade or so, place some sizable bets.

Who knows, maybe we’ll eventually get to see Batman Beyond’s future vigilante zipping around the big screen at some point. In fact, there were rumors of such floated this past summer, before the big Comic-Con reveal of the Bat’s involvement in Man of Steel 2.

What do you think? Would you like to see Batman get a dose of science fiction on the big screen? In the meantime, you can watch the original animated series over on Netflix Instant. 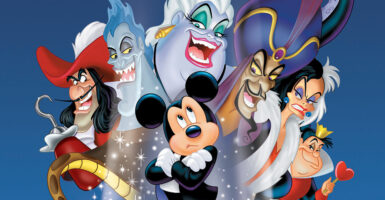