ESA Loses Contact With Philae, Get The Details Here 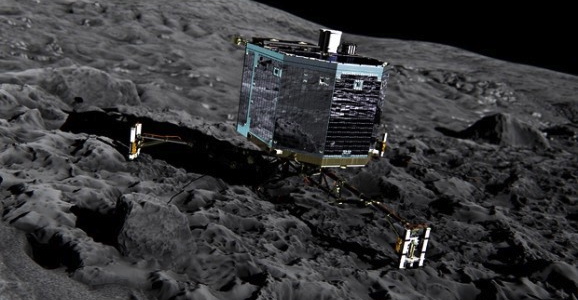 The Philae lander, which made history last week when it became the first craft to touch down on a comet, has gone to sleep. Now, we just have to hope it wakes up.

Philae’s harpoons didn’t deploy during its landing on Wednesday, so it never got properly anchored into the comet. It bounced a few times and eventually landed in a spot under an outcropping of rock, almost entirely in shadow. The solar-powered batteries need 6-7 hours of sunlight a day in order to continue functioning, but only got about 90-minutes, and what scientists feared would happen did. Early on Saturday morning, the European Space Agency (ESA) lost contact with the lander.

.@ESA_Rosetta I'm feeling a bit tired, did you get all my data? I might take a nap… #CometLanding

Philae functioned long enough to get 57 hours worth of science done on the comet’s surface before that happened. It was able to drill into the surface, which is pretty amazing given that it wasn’t anchored into the ground. Among other information, it obtained readings from the Cometary Sampling and Composition (COSAC) instrument designed to detect carbon-based molecules. It’s possible that some of those molecules eventually made their way to Earth billions of years ago and kick started life as we know it. Despite Philae’s relatively short time on the comet, scientists believe the data it collected could “make the mission a game-changer in cometary science.”

I confirm that my @RosettaSD2 went all the way DOWN and UP again!! First comet drilling is a fact! 🙂 pic.twitter.com/eE3xL8CGk0

Even though Philae’s sleeping, its mission may not yet be over—it’s hibernating, not dead. Comet 67P/Churyumov-Gerasimenko is still heading toward the sun, and will reach its closest point next August. As it continues on its way, Philae may receive more light, possibly enough to recharge its dead batteries. But when it gets too close to the sun, probably around March, it will become too hot for Philae to operate, so there’s a wake-up window. Scientists will keep an eye on the lander, measuring how much sunlight it’s getting, and if they determine that there’s enough, they’ll attempt to wake it up. 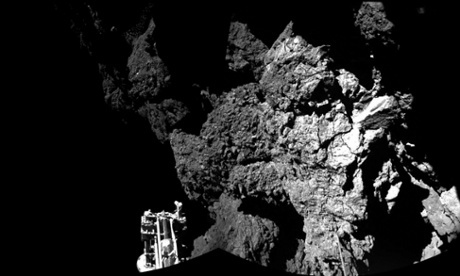 Landers and probes sleep all the time. Yutu and Chang’e-3 cycled into hibernation during the two weeks of lunar night, and both woke up afterward. Rosetta itself slept for a long chunk of its ten-year journey to catch up to the comet, and it too successfully woke up in January. So the rousing of Philae wouldn’t be unprecedented—let’s all hope the lander gets a good rest and can return to form later. Or maybe the aliens will fix it up. Either way, the comet will continue to sing.