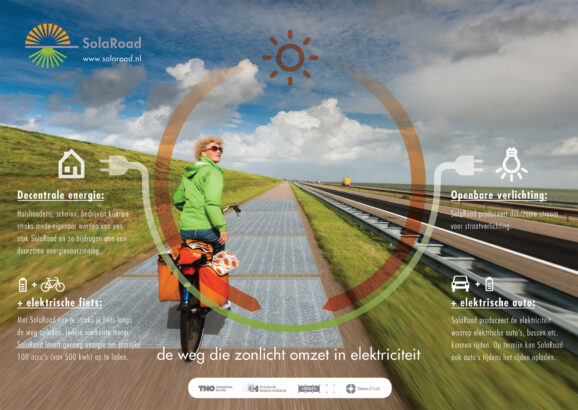 The Dutch are so progressive. There’s Amsterdam and its legalized vices, of course, and now there’s the first functioning solar road that converts sunlight into energy.

The company behind this, SolaRoad, uses a concept and design very similar to Solar Roadways’ (minus the LEDs and signals), though I’m not sure which company had the idea first. Who cares, really? The idea is so great that I hope everyone “invents” or develops something like this. The solar road is comprised of giant solar panels that turn sunlight into electricity and then feed that power back into the local energy grid so it can run street lights and traffic signals, as well as household equipment.

SolaRoads, which began working on the concept in 2009, opened its first prototype on in the town of Krommenie on Wednesday—and because it’s the Netherlands it’s a bike path. Right now, the road is 230 feet long, and will soon extend by another 100 feet. This prototype will work for a few years while the company and other officials gather data regarding the feasibility of implementing the idea on a larger scale and on motor traffic roads. 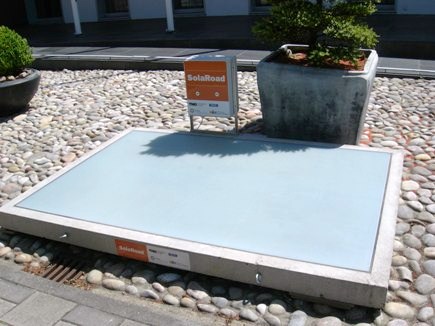 Given the traffic, the design of the slabs has to be carefully considered—it’s not like they can just lay down solar panels. First off, the panels have to be covered by centimeter-thick tempered glass strong enough to withstand the weight of vehicles and the wear of tires, as well as anything that might get dropped on it. It also has to be weather-resistant, as temperatures get pretty chilly in the Netherlands, and roads get salted, etc. The glass has to be translucent to allow in as much sunlight as possible, and it also has to repel dirt and dust. It also has to be skid-resistant, both in terms of safety and to prevent marks.

SolaRoads believes their product could be a “breakthrough in the field of sustainable energy supply,” particularly is the single road is developed into a network of roads that can provide electricity to the vehicles driving on them. That would be a pretty awesome loop, electric cars driving on solar power roads that keep the cars running. Companies in the Netherlands have also considered rigging solar-powered electricity conversion systems on the rooftops, but calculated that even if successful, that would only supply roughly 25% of the necessary energy. But roads cover significantly more area. They expect this relatively small bike path to generate 2-3 households’ worth of annual electricity use. One of the aspects they’ll be testing is how best to redirect this energy back into the grid. I hope they figure out how to integrate vendors selling waffles and fries slathered with mayonnaise somewhere on that path.