See the brand-new trailer that has dropped for the Cobra Kai 2: Dojos Rising game.

With the fifth season of the Cobra Kai series coming to Netflix tomorrow (September 9), GameMill Entertainment and Maximum Games have shared a new trainer for the Cobra Kai 2: Dojos Rising, scheduled to release later this year. The game will be a sequel to 2021’s Cobra Kai: The Karate Kid Saga Continues, which will allow players to assemble and train their own dojos to compete at Karate Tournament. You can watch the trailer above.

According to GameMill Entertainment, the game continues the intense rivalry that makes up the core of this gaming franchise and allows gamers to choose their own dojo — Eagle Fang, Cobra Kai, or Miyagi-Do — and train their fighters to master powerful fighting styles and secure their legacy as Karate Champions. Unfortunately, the publisher didn’t reveal a specific release date past the previously known autumn 2022 release date, but the company did disclose the list of supported platforms revealing that the game will be featured on current- and previous-gen consoles and PC.

As for the novelties and what the new game has to offer, Cobra Kai 2: Dojos Rising will include 28 playable characters, allowing gamers to pick their TV show favorite. These characters will have their own special skills and abilities for players to hone while leading their character to victory. Of course, all the dojos listed above will also be in the game, and players will have the opportunity to train new students and battle and dominate the rivaling dojos.

Additionally, Cobra Kai 2: Dojos Rising will also include several gaming modes, including the all-new and exciting storyline in Story Mode, or the Cobra Classics, which will allow gamers to relive and replay some of the most epic moments from the Cobra Kai television show. This also includes fighting in some of the show’s most iconic locations, including Coyote Creek, L.A. Beach, the high-school area, Valley Fest, and last but certainly not the least — All Valley Tournament, which has its own gaming mode.

The All Valley Tournament Mode in Cobra Kai 2: Dojos Rising brings both single-player and multi-player gaming modes, allowing karate gaming enthusiasts to brawl not just with their friends and neighbors but also with other competitors on the leaderboards. This seems like a busy month for the franchise, considering that the new season of the television series is coming out tomorrow on Netflix, sooner than it was expected.

Except for the assumption that the game will pick up exactly where the previous one left off, today’s announcement neatly revealed everything we could expect from the sequel once it launches. However, the fact that Cobra Kai 2: Dojos Rising lacks a more concrete release date might be worrisome to the gaming fandoms, especially considering the number of canceled or delayed gaming titles in the past two years or so. The release window, at least for the time being, remains set for autumn this year.

Cobra Kai 2: Dojos Rising will be available on PlayStation 4, PlayStation 5, Xbox One, Xbox Series X/S, Nintendo Switch, and PC once it releases later this year. In the meantime, there are rumors about a Cobra Kai film being on the way. 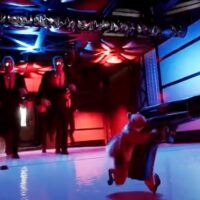