Warner Bros. Discovery has been going through a dramatic transitional period as a company, with several changes happening almost daily that have affected its content on HBO Max, Discovery+, and in theaters. Actors of some of these projects are feeling the pain of that transition, as Leslie Grace and Brendan Fraser can attest to when their superhero flick Batgirl was permanently shelved by Warner Bros. Now, it appears that Willem Dafoe might be the next target of DC Films as test screenings of Aquaman and the Lost Kingdom have recently shown that Dafoe doesn’t appear in the sequel at all.

Willem Dafoe was set to costar in Aquaman and the Lost Kingdom, the highly anticipated sequel to 2018’s Aquaman where Dafoe played Nuidius Vulko, the mentor to Jason Momoa’s Arthur Curry. Having played a major part in the first film to star Momoa as Aquaman, Dafoe will not appear in the sequel after all, and his character will supposedly be killed off screen. Not only that, but Dafoe is reportedly not going to be seen in the DC Universe franchise as the character at all.

Not only will Willem Dafoe not be seen onscreen with Jason Momoa and Nicole Kidman in Aquaman and the Lost Kingdom, supposedly Amber Heard is still in the film despite fans believing otherwise earlier this year. Heard was embroiled in a slew of lawsuits including her ex-husband Johnny Depp‘s defamation trial against her, and proceedings took center stage earlier this year. Many people thought that Heard’s character of Mera from Aquaman would surely be cut from the upcoming sequel, but the same test screenings show the actor continues to appear in the franchise.

Aquaman and the Lost Kingdom has been suffering from the bad press from Heard and Depp’s legal battles. Filming for the sequel took longer than expected due to delays from the COVID-19 pandemic, and there was no confirmation about whether or not Heard, Willem Dafoe, or other actors from Aquaman would return for another project in the franchise. Dafoe had also cameoed in a deleted scene in Zack Snyder’s Justice League, so it was expected that he might show up again in another Aquaman installment.

Before Willem Dafoe was cut out of the Aquaman franchise, the gifted actor graced audiences with his presence in a number of critically acclaimed films. Earlier this year, the four time Academy Award nominated Dafoe played a supporting role in The Northman alongside Nicole Kidman and Alexander Skarsgård, which received positive reviews from critics and audiences alike. Rotten Tomatoes currently ranks The Northman as Certified Fresh with a rating of 89% on its Tomatometer based on 370 critics’ reviews, as well as an Audience Score of 64%. 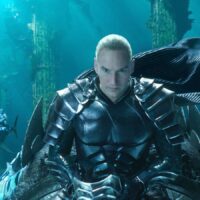