By Michileen Martin | 1 hour ago

A star who is just beginning to rise has gone missing in Los Angeles. Tanya Fear, who starred in a season 11 episode of Doctor Who, hasn’t been seen by friends or family since last week, and they’ve launched a campaign to find her.

According to The Hollywood Reporter, a missing persons report was filed last Thursday, September 9, with the Los Angeles Police Department. Initially, Fear was last reported seen near LA’s Hollywood Bowl on Thursday. Reports have since surfaced that the Doctor Who actress was seen at a Trader Joe’s on Santa Monica Blvd. on Sunday, September 12.

Fear’s family established the Twitter account @FindTanyaFear and the accompanying hashtag to help locate the 31 year old actress. The account is urging everyone to share posters with pictures of Fear, information about the Doctor Who actress, and info on contacting the authorities.

On Monday morning, the family shared a press release, which included some new information, including that Tanya Fear had left her Los Angeles apartment without either her phone or her purse. The release relates information about Fear’s career including her Doctor Who appearance, understandably concerned words from her mother Yvonne Marimo, and news that her parents were seeking to secure visas so they could travel to LA to help in the search.

Friends, family, and more have been working hard retweeting the news about the Doctor Who actress including Fear’s fellow actors like Tawny Newsome (Star Trek: Lower Decks), Arnold Oceng (The Good Lie), and Ralf Little (The Royle Family).

Fear’s appearance on Doctor Who comes not long after Jodie Whittaker’s historic debut as the thirteenth version of the eponymous Doctor. Fear shows up in the notoriously creepy 2018 episode — particularly for any arachnophobic fans — Arachnids in the UK. Fear plays Dr. Jade McIntyre, a zoologist working to increase the lifespans and physical size of arachnids, with the hope of utilizing the spiders’ silk. By the end of the episode, as you can probably guess, giant spiders become a real problem.

Fear made her major motion picture debut five years before appearing on Doctor Who with the role of Harlow in the superhero black comedy Kick-Ass 2. She plays Claire Wiseman in the French dramedy Spotless and has made appearance in series like Endeavor, Midsomer Murders, and DCI Banks.

Last year, Fear showed she could do a lot more than act with the pandemic-era rom com web series Shoot Your Shot which she not only starred in, but wrote and directed.

In one of the account’s most recent updates, @FindTanyaFear reported that the Doctor Who actress was last scene wearing “a short-sleeved brown collared fitted top with a few buttons at the top and dark plaid pants.” If you see her or have any information about her whereabouts, please contact @FindTanyaFear or the LAPD at 213-972-2971. Particularly anyone living in or around the Los Angeles area is encouraged to retweet or otherwise share the posters currently being circulated by Fear’s friends and family. 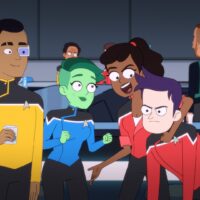