Last week, amidst the deluge of Star Wars: Episode VII rumors that sprouted up online, Lucasfilm dropped a new short film for Star Wars Rebels. The upcoming animated series is going to be the first new addition to the canon since the Disney buy out, and considering some of the reports we heard, is sounds like the links between the show and the impending films will be as strong as we’ve been told. To follow that up, today they’re back with another new short, titled “Art Attack.”

The first offering focuses primarily on Chopper, the sassy little astromech droid very much in the R2-D2 vein. Hera and Kanan show up, but it’s Chopper’s show all the way. This latest video focuses on another member of the team, the Mandalorian called Sabine. Given this approach, you have to wonder if, building up towards the October release, we’re going to get a new short that highlights each member of the main Rebels team.

We’ve heard that Sabine has an artistic streak, which is why her armor is decorated like it is, though painting your exterior various bright colors seems counterproductive if you plan to do a great deal of sneaking around. It also tends to make you stick out in a crowd and easily identifiable, but this is also an animated show obviously aimed at kids, so I can’t get too nitpicky. In this footage, however, you get a first hand look at the street art side of her personality as she tags the wing of an Imperial TIE Fighter as a distraction. 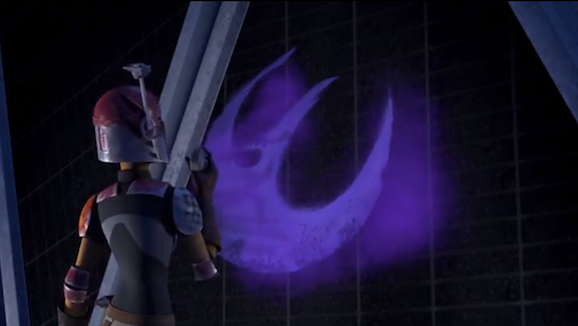 Rebels is set in the space between Revenge of the Sith and A New Hope. As the Empire tightens its grip on the galaxy, which you can clearly see from the very beginning in this clip, the first seeds of what will become the Rebel Alliance are sown. That symbol Sabine leaves on the TIE Fighter looks suspiciously like an early version of insignia used by the Rebels in the original trilogy. Then again, to be fair, it also looks a lot like the Mockingjay symbol from The Hunger Games, which, with a younger audience, may be what they take away from this. But in reality they serve a similar purpose, as icons of rebellion, uprising, and revolutions.

Here’s the first short, “The Machine in the Ghost,” and now that we’ve got a couple of these small films to peruse, we’ll be keeping our eye out for more. Hera and Kanan both seem more than deserving of their own short, and we haven’t seen hide nor hair from Zeb or Ezra in either, so perhaps they’ll make an appearance soon.

Star Wars Rebels premieres on Disney Channel this October, and will ultimately make its way over to its regular home on Disney XD for weekly installments.