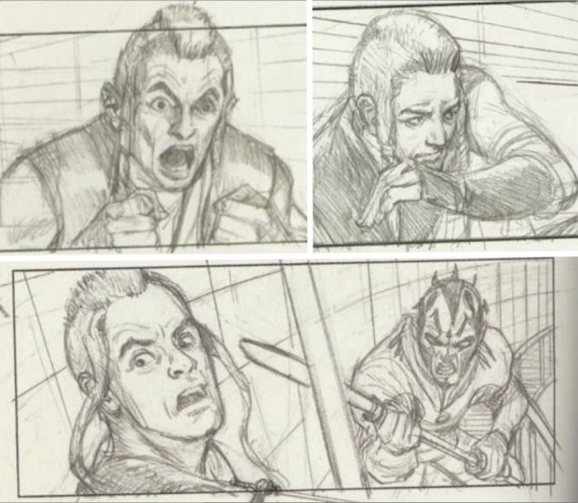 Every once in a while there’s a story that flies under our radar but which simply must be given its moment in the spotlight. The release of more Star Wars concept art is an interesting but hardly earth-shattering semi-regular event these days, and it’ll only become more prevalent in coming years as new Star Wars movies roll into theaters. But for this story we’re looking back, not forward, back to a time before the prequels had erupted through our collective childhoods, covering everything in a sickly sheen of too-pristine CGI and Gungan poop. Because while I’m not sure if The Phantom Menace would have been any better if Qui-Gon Jinn had been sporting a mohawk, that’s an unrealized reality I would totally be willing to take for a test drive.

Qui-Gon’s epic mohawk is on full display in storyboards from the aptly titled 2013 book Star Wars Storyboards: The Prequel Trilogy, which you can grab at Amazon for under 30 bucks. Qui-Gon’s epic hair may be the most hilariously awesome tidbit revealed by the book, but it’s hardly the only one. At the stage when these storyboards were put together, Qui-Gon was obviously intended to be a bit younger, closer in age to Obi-Wan. Here’s the pair squaring off against, er, a serving robot and a pair of space birds. 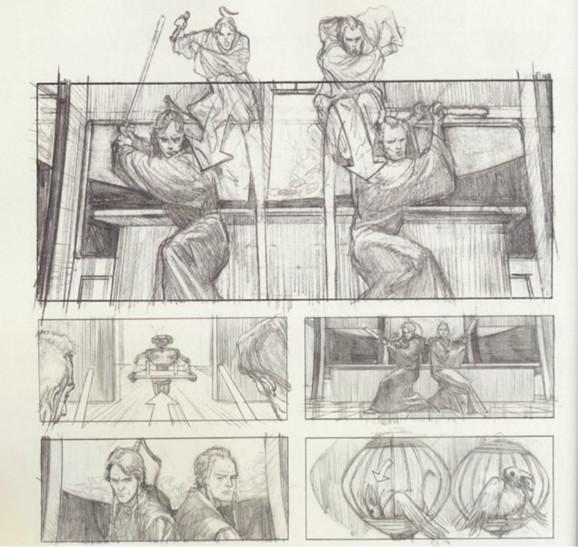 Jokes aside, that moment we never got to see was part of the opening sequence where Qui-Gon and Obi-Wan infiltrate the Trade Federation vessel during the beginning of The Phantom Menace. 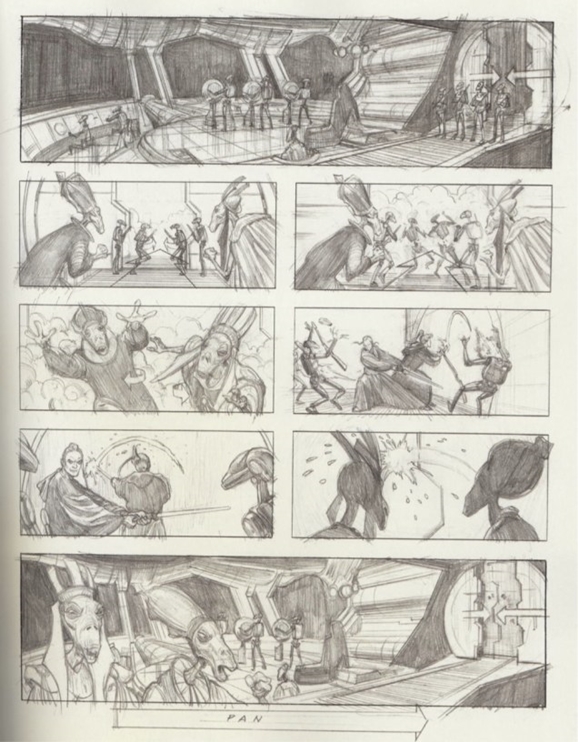 Sadly, Jar Jar Binks did already exist at this point, but he seems to have been, well, a bit larger. 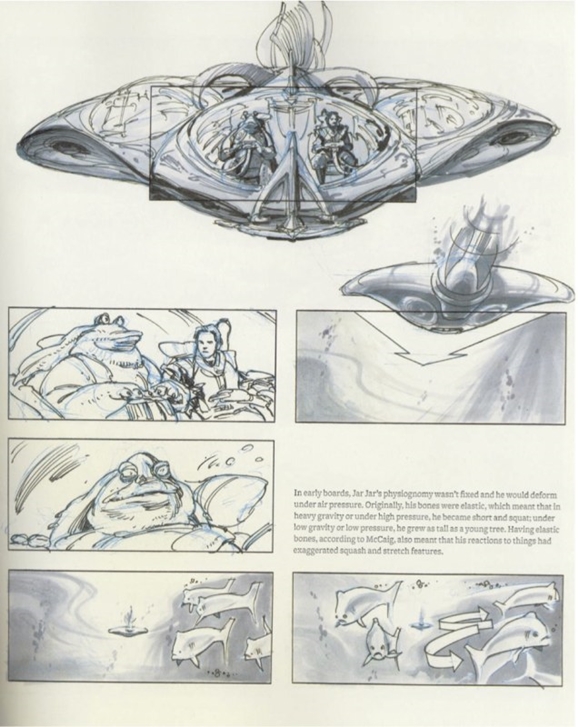 According to the book this wasn’t just setting up Binks in the time-honored tradition of the hilarious fat guy. As the caption explains:

Originally [Jar Jar]’s bones were elastic, which meant that in heavy gravity or under high pressure, he became short and squat; under low gravity or low pressure, he grew as tall as a young tree.

I think they were only something here with the high pressure, but they should have kept cranking it up until he popped like the dude in the garbage compactor in Kick-Ass. Talk about fan service.

And it seems that Qui-Gon wasn’t the only one whose age was tweaked on the way to the final film. The art below shows a somewhat older Anakin planting one on Padme. That rascal. Apparently at that point Anakin’s look was modeled after actor James Robinson, who played young William Wallace in Braveheart. And you’ll have to excuse me for a moment because I need to sit back and replay the entire prequel trilogy in my head with Mel Gibson in the role of Anakin. When that motherfucker goes Dark Side, he really goes Dark Side. 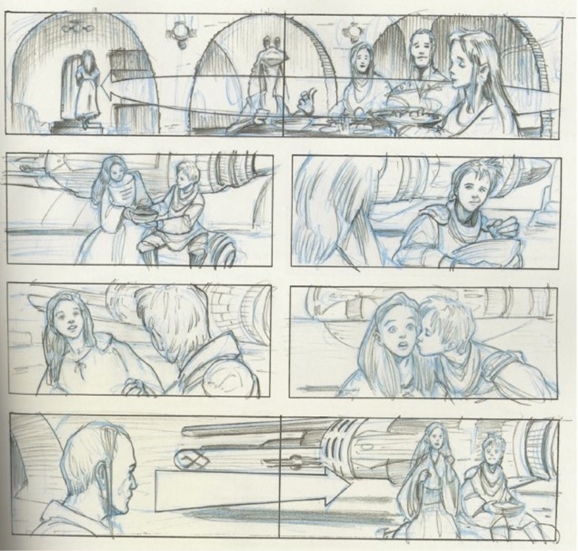 Episode II is also represented thanks to art from the arena battle on Geonosis, complete with an alternate sexy outfit for Padme. 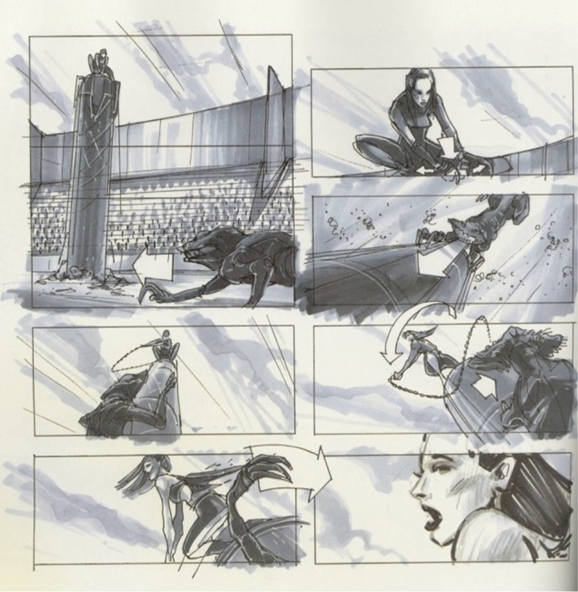 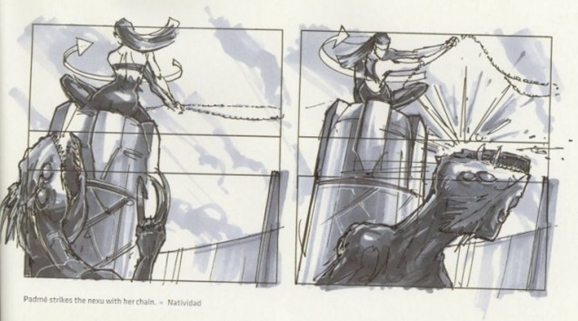 And then there’s this lovely moment from Episode III where Anakin and Padme indulge in a little light choking for(c)eplay, setting them up for the climactic three-way involving Obi-Wan and — I’m sorry, I’m being told that’s not what happened at all. But it is in my brain. And, again, with Mel Gibson. I won’t go into details, but the words “sugar tits” do come into play. 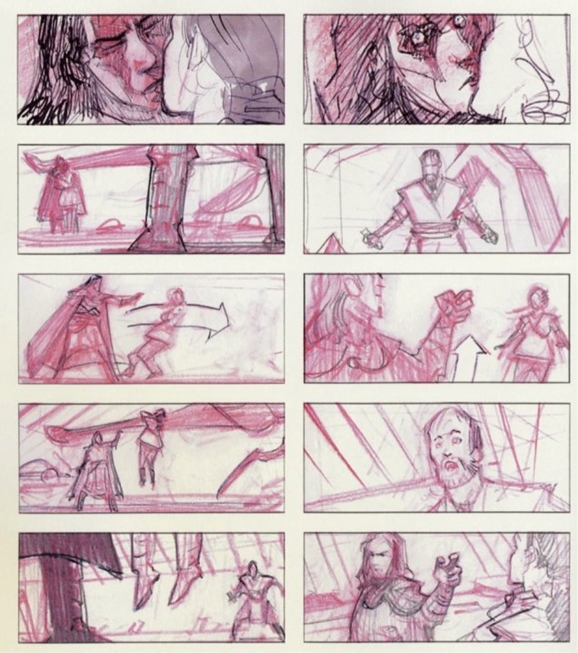 You can go grab a copy of the book for yourself right here.