As much as I loved playing with LEGOs when I was a kid — hell, who am I kidding, I still love playing with LEGOs — it’s kind of hard to believe how much the building blocks have expanded throughout pop culture. In addition to the hugely entertaining Lego Movie there have been dozens of cartoons and direct-to-DVD installments, not to mention a mega-successful video-game line that’s spoofed everything from Star Wars to Marvel to Jurassic World. We probably won’t ever see any officially licensed LEGO Interstellar sets, but thankfully that doesn’t mean LEGO maniacs can’t just create their own, and that’s precisely what jp_veliciraptor did. His recreation of Interstellar’s Ranger spacecraft is simple but elegantly crafted, and I love that he used clear LEGO pieces to simulate the terrain of the ice world Cooper (Matthew McConaughey) and company explore. The absolute best part is the in-retrospect-obvious realization that the blocky robots TARS and CASE are freaking perfectly suited for the LEGO world. They already look like somebody built them out of LEGOs in the first place, at least until they start unfolding like goddamn space-age Swiss Army knives. They already got all the best lines in the movie; now they’re the best part of this unofficial LEGO build. And that’s with my Honesty settings at 98%. Interstellar will hit Blu-ray and DVD on March 31st. That should give you plenty of time to build a five-dimensional LEGO bookshelf for LEGO Cooper to hide behind while yelling “MURPH!” over and over. All I know is, there’s at least one guy out there who’s going to absolutely lose his shit over this set. 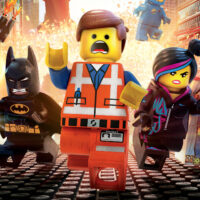