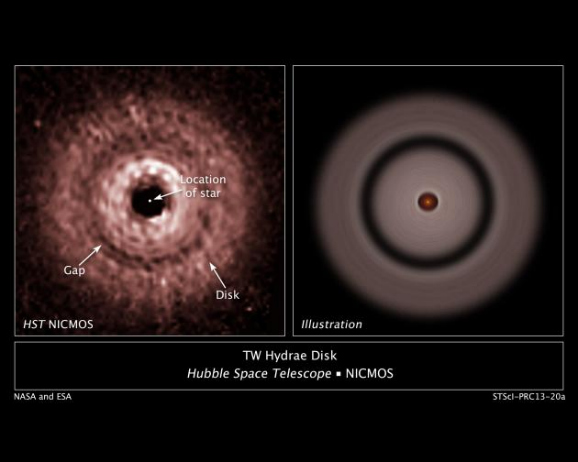 Astronomers using NASA’s Hubble Space Telescope may have discovered a new exoplanet forming very, very far away from its parent star. The exoplanet looks to be forming some 7.5 billion miles away from the red dwarf star TW Hydrae, located in the Hydra constellation. That would put it nearly double the distance from our Sun to the dwarf planet Pluto, and make it the planet furthest from its star of any we have discovered up to now.

NASA announced the discovery of the exoplanet last week. The system in question is 176 light-years from Earth, and the suspected exoplanet is estimated to be between six and 28 times the mass of our blue planet. While the existence of the planet hasn’t yet been confirmed, astronomers spotted a 1.9 million-mile-wide gap in the disk of dust and gas that surrounds TW Hydrae. This is believed to be a sign of a forming planet as it zips through the dust and coalesces.

TW Hydrae is about eight million years old and 55 times less massive than our Sun. It’s not a system where astronomers expected to find a planet, since the system is comparatively young and the star is such low-mass. According to theories that planets form over tens of millions of years, TW Hydrae shouldn’t be old enough to have any planets. The distance from the star is also a factor, since there should be less material to become a planet out that far. For comparison’s sake, Jupiter is 500 million miles away from the Sun and took 10 million years to come together. Again, compare that to this possible planet which is 7.5 billion away from its star.

John Debes of the Space Telescope Science Institute in Baltimore, MD leads the team that discovered the gap in TW Hydrae. Debes said, “If we can actually confirm that there’s a planet there, we can connect its characteristics to measurements of the gap properties, That might add to planet formation theories as to how you can actually form a planet very far out.”