Warner Bros. hasn’t had a lot of success in getting Superman solo movies to work, but there will be a next Superman movie. It’s inevitable because despite all those past financial failures with the character, Superman is still the most popular superhero in the world.

A recent poll conducted by the organization One Poll even ranked him ahead of Marvel’s hugely popular superheroes. Their data has Americans ranking Superman as their favorite superhero, ahead of Spider-Man at number two and Batman at number three. Captain America and Iron Man rounded out the top five and numbers four and five respectively.

Henry Cavill Is Back As Superman

Though Warner Bros. didn’t want Henry Cavill back as Superman, Cavill has received so much support from fans who want him back in the role, that WB execs have been a little worried about fan backlash should they replace him. So they won’t replace him. Cavill is coming back as Clark Kent.

Deadline confirms that Henry Cavill is now officially in talks with Warner Bros. to return as Superman. That’s the good news. The bad news is that he won’t be in Man of Steel 2. Instead they say. “Cavill could come back in a couple of different ways, not a standalone film.”

What are those “couple of different ways”? Well we’ve heard rumors for awhile that The Rock wants him to show up in Black Adam. But apparently it won’t be there that we’ll see him first. Instead Variety reports that Cavill will likely make his next appearance as Superman either in Aquaman 2 or in Shazam 2. It won’t be in Black Adam or Wonder Woman 3.

Whether they liked Man of Steel or not, fans seem to agree that Henry Cavill was a great Superman. Everyone wants him back. It won’t be easy for WB to close this deal, even though talks are underway. though in the past we heard rumors that Henry Cavill might be willing to take less money to return as Superman, it seems those aren’t true. The latest word is that Henry Cavill is now holding out for more money. In order to get him back, Warner Bros. is going to have to pay them more in the past.

Frequent scooper Grace Randolph says, “He wants to get paid like an A lister, and I’d imagine some backend participation?”

Henry Cavill’s career has taken off in a big way since he debuted in Man of Steel. He’s the star of The Witcher, the most popular television show on the planet. He’s been in numerous movies and has many more on his upcoming plate. It makes sense that he’d want to be paid like the big star he is.

Henry Cavill is making big money in big roles. He doesn’t need Superman anymore, but he’s willing and eager to do it again, if they pay him. And with talks officially underway, it looks like WB is now willing to pay their previous Superman to be the next Superman.

If you want Henry Cavill in Man of Steel 2 click here to let Warner Bros. know!

The Plot Of The Next Superman Movie

Movie studio Warner Bros. has recently committed to developing a variety of standalone projects for their various DC Comics superhero characters. Some of these are coming to HBO as limited series television shows. Some of them will be movies. These standalone projects won’t have any connection to the larger Justice League movie universe continuity, and at least one of them may involve Superman.

Word is that Warner Bros. is developing a standalone movie based on the popular comic book storyline “The Death of Superman” for the next Superman movie. In that plot, Superman is killed by the monster Doomsday (who already appeared in Batman v. Superman) and the world descends into a kind of chaos. In his place a variety of people arrive to take on the mantle of Superman, with some of them claiming to actually be Superman resurrected. Eventually one of them turns out to actually be Superman resurrected by a regeneration chamber, and by the end everything is kind of back to Superman normal.

The original comic was groundbreaking and got huge headlines when it was released. It was hugely influential on the comic book industry, too. Targeting that as a standalone project makes a lot of sense for the next Superman movie.

The Superman Plan If Cavill Is Out

If Warner Bros changes their mind and decides not to bring Henry Cavil back as Superman, their alternate plan is to erase his Man of Steel movie from continuity.

If they got that route, that means going forward, as far as Wonder Woman and Aquaman are concerned all that stuff they did with Superman never happened. And if The Flash’s movie ever gets finished, he won’t remember that Henry Cavill’s Man of Steel exists either.

Adding fuel to the idea that Henry Cavill’s time as Superman is over, Amy Adams recently spoke about where things are at. Adams played Lois Lane in Man of Steel and when asked if she thought she’d play the character again in the next Superman movie Adams said, “I think the studio is moving in a different direction, from my understanding.”

Superman won’t be on screen in a solo movie without Lois Lane, and if they do recast Lois Lane then it’s safe to assume they’re also recasting Superman. Here’s hoping they continue to reconsider and bring Cavill back.

The People Making The Next Superman Movie

Star Wars director JJ Abrams recently signed a huge development deal with Warner Bros. and insiders claimed that part of the deal would have him directing the next Superman movie. Abrams has a long history with Superman, having written a Superman script which was never used, way back in 2004.

Now though, Abrams may be out. WGTC reports that reception to JJ Abrams last Star Wars movie The Rise of Skywalker was so polarizing, that Warner Bros. no longer wants him directing their next Superman movie. It may be the feeling is mutual, and that after the disappointment and frustration of Skywalker, Abrams isn’t all that eager to get involved in another big franchise anyway.

That means for Warner Bros the search is on to find someone who can actually make the next Superman movie work.

Focusing On The Son Of Jor-El

Warner Bros. had been developing a Supergirl movie, but word is that project has been cancelled, specifically to put more of their focus on getting Superman right. The news comes from Heroic Hollywood, and it makes a lot of sense in the current climate.

It’s clear that Warner Bros. feels they’ve never really gotten Superman right and if you don’t have a functioning Superman franchise, it probably doesn’t make sense to start cranking out movies about his cousin. Additionally, with the Coronavirus crisis crushing the earning potential of most Hollywood studios, money is tight. It’s likely they simply don’t have the money to produce both a Superman movie and a Supergirl movie.

Don’t be surprised if we start seeing even more fringe movie studio projects, like Supergirl, being cancelled in the coming months as the accounts work out the damage wrought by the Pandemic economic crisis.

Three actors have played Superman in movies now: Christopher Reeve, Brandon Routh, and Henry Cavill. While all of them brought something great and unique to the table it’s still hard to argue that either of the more recent two topped the original: Chris Reeve.

If there was any flaw in Christopher Reeve’s portrayal of the Man of Steel it was his costume. That weird blue spandex and underwear thing he wore was great in its time, but it hasn’t held up very well. That may have led some of you to believe Chris Reeve’s Superman wasn’t as badass as some of the superheroes you’re used to. So one fan created this piece of art showing Reeve in Henry Cavill’s Man of Steel outfit. It’s awesome…

Henry Cavill was great in this costume. Chris Reeve is even better. Rest in peace Chris.

Brandon Routh On Being Superman

Playing a superhero isn’t easy, especially if it doesn’t go the way you think it will. Brandon Routh played Superman in the 2006 soft reboot of the character, Superman Returns. It was supposed to launch a new era of Superman that would have Routh playing Clark Kent in superhero movie sequel after sequel. Instead the movie barely managed to make back its budget. While the film got good reviews (and so did Routh), that box office take meant that Warner Bros. abandoned their next Superman movie plans and abandoned Routh.

For Brandon Routh the whole experience of being the world’s most famous superhero ended up being pretty traumatic. He spoke out about it for the very first time on the Inside of You podcast hosted by Smallville alum Michael Rosenbaum, where he had this to say about the whole Superman experience…

“I would say that the end of my run as Superman in Superman Returns that did not pan out the way I thought it was going to, the way everyone around me thought it was going to. I had to really come to terms with a lot of that. There was no sequel, the movie was widely well-reviewed, people liked the movie, but it, you know, made almost $400 million worldwide but that wasn’t enough. And it was a very slow fizzle out of the possibility of a sequel over the next two, three years and I did everything that I could do, that I thought, in my world to help make it happen.”

His struggle to deal with the failure of Superman Returns led to addiction, but not a substance addiction. It was his wife Courtney Ford (who currently co-stars with him on Legends of Tomorrow) who helped him through it. He explains…

“She knew me best then, she knows me best now and so going through that whole trauma of Superman Returns, the end of Superman Returns was a long drawn out process of me in denial for much of it and thankfully, I guess, I didn’t lean on drugs or alcohol, partying. I played World of Warcraft endlessly … it wasn’t helping me. It was a coping mechanism but it wasn’t teaching me things until I finally came, you know, had several experiences where I had to come to terms with that and she was part of that.”

But it’s a shame he never got those Superman Returns sequels and that he won’t be involved in the next Superman movie. Whatever you think of Superman Returns, most people agree that Routh was a great Superman. 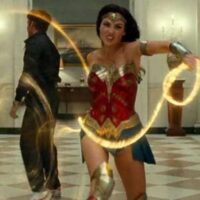