Nope, don’t worry. As far as we know, the hero of The Mandalorian will keep doing little side quests in service of the main quest for as many years as he wants to keep doing it. Obi-Wan Kenobi is almost here, albeit, minus one dude who’s literally half the man he used to be. Ahsoka and Andor are still on the way last we heard, so no worries about that. No, the Star Wars project that’s in danger is a much more tangible yet much less popular one — The Galactic Starcruiser Hotel at Disney World is struggling to find anyone willing to stay in the thing.

That’s the news from CBR, who says that in spite of reservations being open through December 2022, well… it looks like reservations are bound to stay open through December 2022 and beyond. The site says some months — August, October, and December — list exactly zero reservations. There are reservations during some of the busiest months, yet there are still rooms available for June and July. In spite of offering an immersive Star Wars experience including rooms made to look exactly like the cabin in a Star Wars starship, fun activities like lightsaber training and playing sabacc, a one-day park ticket, complimentary meals in the hotel, valet parking, and more, it doesn’t seem like anyone wants to stay at the place.

Why doesn’t anyone want to stay? After all, it’s a hotel with a theme based on one of the most popular franchises in the world. Well, it’s either a complete, mind-boggling mystery, or it could — and this is just, you know, blind speculation here — have something to do with a price tag that, in order to meet, you would have to sell off the most valuable Star Wars collectibles you have and then maybe break into your buddies’ places, steal their collectibles, and sell off those too.

CBR gives a couple of examples of the Star Wars hotel’s pricing. Pricing is based on both what room you choose — “ranging from the standard cabin all the way up to the Grand Captain Suite” we’re guessing in the Grand Captain Suite there’s no danger of getting dropped into the garbage compactor — and how many guests you have. For example, a one-night stay for two people in a standard cabin will cost $4,809. That’s one night. Almost $5,000 for one night. As far as we know, no death sticks are brought up to your room, you don’t get to wear any rare or endangered Ewok fur, and no actual, functioning, genuinely capable of melting steel lightsabers are given or loaned to you. You sleep in a room that looks different from most rooms and you watch other people cosplay. That will be $4,809 please.

Sure, there are Star Wars fans out there for whom the experience would be worth that kind of dough and if so, and they can afford it, that’s wonderful. But what does the market look like for hardcore Star Wars fans who can drop that kind of money for a night of LARPing? During a pandemic? During what is arguably a time filled with more economic, political, and actual physical insecurity than any of us have seen in our lifetimes? If the hotel stays open, good for them. I have a bed and Disney+. I’m not paying $5,000 a night so I can go to the hotel bar and some jerk serving juice to a bunch of muppets can see my iphone and yell, “Hey! We don’t serve their kind here!” 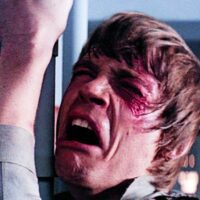