Batman lovers are clamoring for any and all news on the Matt Reeves film. Originally set to be released in June 2021, The Batman has had several delays as many films have in the height of COVID-19 (via Inverse). With the newest release date set in March of 2022, the premiere cannot come fast enough. Luckily in the meantime, Empire magazine has released a slew of new promotional images that look breathtaking. Fans can see Robert Pattinson and Colin Farrell as Bruce Wayne and The Penguin respectively. Also featured in the photos are highly anticipated characters Catwoman (Zoe Kravitz) and The Riddler (Paul Dano). Check out the images in the following series of tweets.

Judging from these stills and the new Bat and Cat trailer, Reeves’ tale is a gritty and updated version of Batman. Audiences have seen Christopher Nolan’s dark telling and continue to appreciate The Dark Knight for its portrayal of The Joker. However, it seems that The Batman is taking a different side to Batman’s darkness. Robert Pattinson does not appear to be a playboy philanthropist as his alter ego Bruce Wayne. And the Batmobile is instead a supercharged muscle car heavily featured in the trailer.

This darkness is something that Reeves wholly admits to in an interview with Empire magazine. Viewers may remember the Nirvana song ‘Something In the Way’ that gave the original trailer an extra punch. This was not by accident. Reeves listened to the song while writing the script for The Batman. He even interpreted Bruce Wayne to not appear as fans have seen him before. Instead of a flashy billionaire, Bruce is closer to an archetype of Kurt Cobain, the tragic lead singer of Nirvana. “Rather than make Bruce Wayne the playboy version we’ve seen before, there’s another version who had gone through a great tragedy and become a recluse,” Reeves stated to Empire. Robert Pattinson backed up this reading of Bruce in the article. Bruce has been hiding away after the death of his parents. His only interaction with people on a day-to-day basis is with Alfred (Andy Serkis).

This gives The Batman a gothic and noir feel that had not been leaned into so hard before. Tim Burton’s films starring Michael Keaton was the closest comparison to Reeves’ portrayal of Gotham. Burton is the creative force behind spooky films such as Beetlejuice and Edward Scissorhands. His Batman films show gothic architecture and turn some characters into horrific versions of their comic counterparts. His version of The Penguin (Danny DeVito) was the stuff of nightmares with his oozing black bile and consuming raw fish. Burton was interested in turning the three main characters of the film all into animal people. Hence creating a Penguin that was born with penguin flippers for hands (via Collider). Colin Farrell appears to be more comic accurate as a human boss of crime.

But that isn’t Batman Returns‘ only connection to Reeves’ The Batman. With the inclusion of The Penguin and Catwoman, the two films seem more alike than anyone could have thought. Zoe Kravtiz’s portrayal of Selina Kyle even has a callback to Batman Returns (via CBR). Catwoman refers to having nine lives, which was a sticking point in Michelle Pfeiffer’s depiction of the character. While this may just be an allusion, in some ways Reeves may be picking up where Burton left off – though seemingly more in character. With only a few more months to go, it won’t be long before audiences can see Robert Pattinson in full Batman getup when The Batman premieres on March 4th. 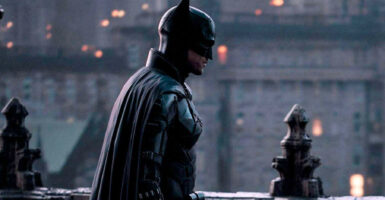 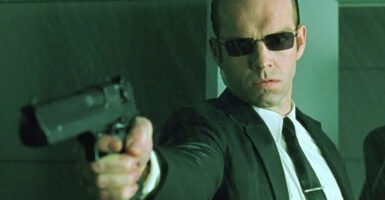