Salma Hayek showed off her incredible form in a Gucci dress at the 2022 LACMA Art + Film Gala.

The 2022 LACMA Art + Film Gala unfolded this past weekend, and superstar Salma Hayek was there looking incredible in a gold crystal Gucci dress with a precariously low cut. According to Yahoo! Life, the star of the upcoming Magic Mike’s Last Dance accessorized the look with Rahaminov diamond jewelry for the star-studded event. To what should be the gratitude of anyone lucky enough to see them, shots of Hayek in the dress were shared not only on her official Insta page, but on that of LACMA (Los Angeles County Museum of Art).

The gala Salma Hayek attended on Saturday was the 11th such gala, in an annual series that in the past has been dedicated to artists across different mediums. This year’s event was dedicated to visual artist Helen Pashigan and Korean filmmaker Park Chan-wook (Oldboy). Along with Hayek, celebrities in attendance included Billie Eilish, FINNEAS, Jesse Rutherford, YouTuber Claudia Sulewski, Kim Kardashian, Sydney Sweeney, Heidi Klum, Sebastian Stan, Idris Elba, and more.

The nature of her role in the film has yet to be revealed, but one of Salma Hayek’s next feature performances will be alongside Channing Tatum in Magic Mike’s Last Dance which will reportedly conclude the series. A couple of weeks ago, Tatum teased fans in more ways than one by releasing an official photo from the feature in which Hayek–her eyes closed–caresses the titular dancer’s abs. The dramedy is set to release Valentine’s Day weekend 2023.

Salma Hayek’s career has seen her collaborate with filmmakers like Ridley Scott, Quentin Tarantino, Steven Soderbergh, Robert Rodriguez, Chloé Zhao, and more. In spite of that impressive list, the House of Gucci star says the best director she’s ever worked with is someone known more for her work in front of the camera than behind: her Eternals co-star Angelina Jolie.

Sometime likely in 2023, we’ll get the chance to see Salma Hayek in the lead of Without Blood. Directed by Jolie, the film is based on the 2002 novel of the same name by Alessandro Baricco. Hayek stars as a woman on a quest for revenge after her family is murdered in the midst of an unspecified military conflict.

Speaking about her experience making Without Blood, Salma Hayek called Angelina Jolie “the best director I’ve ever worked with,” adding that she “absolutely loved working with her; enjoyed every second of it.”

In her next role, we’ll get to hear Salma Hayek instead of seeing her. She will once again voice Kitty Softpaws opposite Antonio Banderas in Puss in Boots: The Last Wish. The animated film is due out December 21. 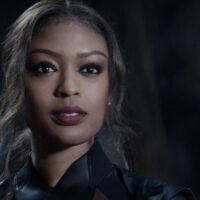