Star Wars: Episode VII: This May Be Our First Look At The Film’s Main Villain

We can’t promise that this will be the last post related to Star Wars: Episode VII for the day, but given the sheer amount we’ve already written about it so far over the last few hours, including one last night, if there is any more we might just start pulling out our own hair. We’ve seen a redesigned stormtrooper helmet, got an idea of what Han Solo might wear come December 18, 2015, heard about some interesting flashbacks, and even got the skinny on possible villains from the next jaunt into that far away galaxy. And hot on the heels of that last bit of information, we may have our first look at the big bad from Episode VII.

If you’re not into SPOILERS, and want something to still be secret when you sit down in the movie theater two Christmases from now, for the love of god, stop reading now. And again, these are unconfirmed rumors, believe what is written at your own risk.

Until late last night I had never heard of the website Indie Revolver, but over the last day and a half they’ve certainly done their best to increase traffic as they’re the ones behind two of the aforementioned stories, as well as this one, which is related to one that they didn’t break.

Earlier today we heard unsubstantiated reports elsewhere that the Inquisitors will be the primary villains in Episode VII. Most of what we’ve heard in this regard up to now involves the Inquisitor from the upcoming animated series Star Wars Rebels, in which he will be the main antagonist. We also heard that they will be serving Darth Vader in a flashback scene (which may or may not include a young Princess Leia, played by Carrie Fisher’s real life daughter Billie Lourd—told you it’s been a busy day). This certainly provides the strong link between the two titles that we’ve heard so much about.

This piece of concept are below, disseminated by Indie Revolver, may be our first glimpse at the Inquisitor in Episode VII, or at least one of them as it sounds like there are more than one. We heard the main Inquisitor has part of his face is covered with metal and that he’s a cyborg, and if this drawing is accurate, that certainly appears to be the case. But what are we looking at here? The Inquisitor is checking out Darth Vader’s broken helmet, but what does that mean? Is this the same guy from Rebels which is set before A New Hope? That character doesn’t have the same metal appendages as this fellow, but given the time difference, he could have acquired them over a long, brutal life (we also heard that the mechanical hand in J.J. Abrams’ recent Force for Change message belongs to him). It’s possible that he was a protégé or even contemporary of Vader back in the day. (If this is the case, my guess is that newcomer Max Von Sydow plays the main Inquisitor, which would honestly be pretty sweet.)

Here’s what the article says about the character:

He’s tall and thin and terrifyingly creepy, with glowing red eyes to match his red lightsaber. He’s got some robotic upgrades, like Vader – but no mask. The cybernetic bits weave in and out of him. He’s got a human upper lip, a steel jaw… and the robotic hand that JJ Abrams posted an image of. Basically, we have no idea what any of this means, what the hell is going on, or even if any of what we’ve heard is real. The masochistic part of me hopes this is part of some elaborate misinformation campaign and that Bad Robot, Disney, and Lucasfilm are just fucking with everyone. That would totally be a dick move, but also hilarious to boot, getting assholes like me to spend hours of our lives discussing complete and utter nonsense. 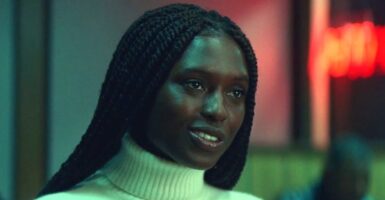