David Fincher’s 20,000 Leagues Under The Sea Is Sunk 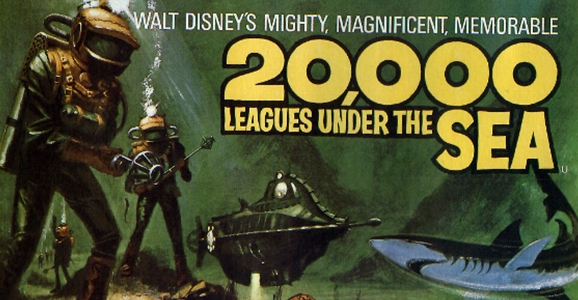 Even though Disney has proven cash cows in the form of Marvel, Pixar, Lucasfilm, and the Muppets, people are still talking about the financial loss of last year’s box office bomb John Carter. Now they’ve got another pricey dud with The Lone Ranger, the latest film from director Gore Verbinski and actor Johnny Depp. Since Disney is probably going to be a bit more risk averse when it comes to launching unproven possible franchises, and with director David Fincher opting to direct the crime thriller Gone Girl with Ben Affleck set to star, the studio has put the brakes on the 20,000 Leagues Under the Sea reboot, at least for the time being.

According to The Playlist, although the project has been in the works with Fincher in the director’s chair since 2011, the risk just seems too high to gamble $200+ million on the project. Brad Pitt had even expressed an interest in playing Ned Land in the film, but nothing ever materialized from it. That’s a shame since the screenplay was penned by Scott Z. Burns, writer of projects such as Dawn of the Planet of the Apes and Contagion.

Actors Matt Damon and Daniel Craig were also interested in the project at various points over the years, but ultimately they could not commit to a lengthy 140-day film shoot. Channing Tatum was another name mentioned as a possibility for the character of Ned Land, but since he’s still an actor on the rise, rather than a proven box-office magnet, Disney didn’t give the greenlight on Tatum in the lead role.

The country of Australia was even ready to offer Disney and the 20,000 Leagues Under the Sea reboot a hefty $20 million in tax breaks and other incentives if they moved the production Down Under. The Australian government was offering Disney the full use of the Village Roadshow Studios in Queensland, Australia. That’s the same studio Twentieth Century Fox used to shoot the upcoming movie The Wolverine.

20,000 Leagues Under the Sea: Captain Nemo (the defunct reboot film’s official new title) would’ve been David Fincher’s follow-up to his remake of The Girl with the Dragon Tattoo in 2011. Since then, Fincher produced and directed a few episodes of Netflix’s Emmy Award-nominated House of Cards, starring Kevin Spacey and Kate Mara.

The original 20,000 Leagues Under the Sea was the first live-action science fiction film under the Walt Disney banner in 1954. It followed a team investigating a series of mysterious shipwrecks. They encounter an advanced submarine called the Nautilus, and its despotic captain, Nemo. Kirk Douglas starred as Ned Land, while James Mason played the ominous Captain Nemo.

There’s no telling if Disney will ever resurrect 20,000 Leagues Under the Sea, but if so it looks like it will be without Fincher. The sheer fact that Disney couldn’t make it happen with a high-caliber director like David Fincher or viable leading men such as Matt Damon, Daniel Craig, and Channing Tatum just speaks volumes about this doomed film reboot.