When it was announced that Star Trek: The Next Generation was coming to Blu-ray, that was enough to get any die-hard Trekkie excited. That excitement built even further with the word that the TNG eps would be getting the same treatment as the Original Series sets, getting a massive digital restoration and having much of the effects work replaced with snazzy new versions. The result was a first season release that any SF fan would be happy to add to their collection. The much-anticipated second season of The Next Generation hits shelves today, and unfortunately it’s being greeted with a chillier reception thanks to effects restoration work that is said not to live up to the high standard set by the first release.

Garth Franklin over at Dark Horizons has rounded up the story, and it basically comes down to this: CBS Digital was responsible for the effects restoration on the first season set. However, because of the tight release schedule — CBS wants the whole series on Blu-ray by 2014 — CBS Digital simply doesn’t have the time or manpower to handle all the TNG sets. Because of this, CBS Digital is working on the odd-numbered seasons, while the even-numbered ones are being assigned to other post-production. Season 2 went to HTV Illuminate.

While early reviews say that the live-action footage looks great, there are some problems when it comes to the visual effects. There are ongoing discussions of the problems at places like Trek Core and Blu-ray.com, but they include things such as a sharp, high-def Enterprise on top of a fuzzy, low-rez background (click for bigger version to really see the difference). Or then there’s this lovely screen capture, featuring the Enterprise apparently having learned to cloak just the leading edge of its saucer section… The good news is that the set is still earning high marks aside from the problems described above, and TrekCore says that HTV will not be handling the fourth season release. (This isn’t to suggest these issues cost them the job, however; it sounds like season 4 was always scheduled to go to a different post-production house.) I imagine many of these problems wouldn’t even be noticed by many Trek fans, unless they’re series videophiles. However, given the positive reception for the first Next Generation set, as compared to Season 2, I wonder if CBS will rethink its release schedule and keep the work in-house.

You can buy Star Trek: The Next Generation – Season 2 on Blu-ray right here. 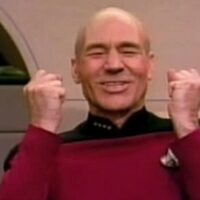 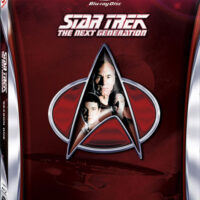 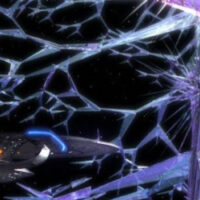