It’s like something straight out of Jurassic Park: scientists working from tissue samples found deep within a frozen squirrel’s nest have “resurrected” an Ice Age flower. They haven’t just isolated the DNA or cultivated a few cells, mind you. A team of Russian scientists has actually grown a plant (with blossoms and viable seeds) that was last seen on the planet 30,000 years ago. It’s a rather pretty little flower and looks like more like a bloom you’d find by the side of a highway or in an abandoned field than something woolly mammoths would have trampled. 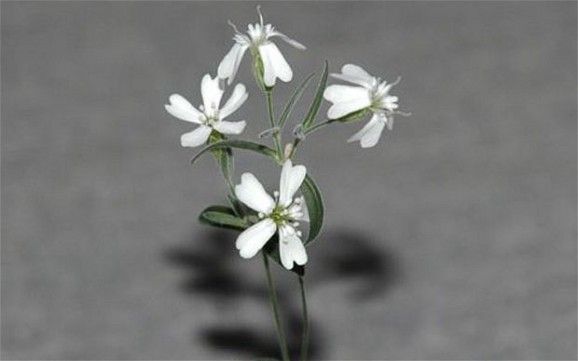 Instead of pulling DNA out of an amber-encased mosquito, the Russian scientists used tissue samples recovered from fossilized squirrel burrows 125 feet down in the Siberian permafrost. Stanislav Gubin, one of the scientists involved in the project, calls the soccer ball-sized, hay-and-fur-lined burrows “a natural cryobank” since the frozen sediments surrounding them made walter infiltration impossible.  The same burrows that held the fossil fruit used for this experiment also held bones of large Ice Age mammals such as the mammoth and woolly rhinoceros.

Researchers in Canada previously revived much younger plants from fossilized seeds found in burrows, but this flower (Silene stenophylla) is officially the oldest plant to be regenerated.  It also proves that frozen tissue can survive and remain viable for much longer than might be expected.  This is good news for the scientists hoping to resurrect animals (such as mammoths) from the Ice Age — a hunt that both the Russians and the Japanese are already on.