Where would the gaming world be without modders? Brave souls take their time to create new ways for the world to enjoy some of the most popular video games. That is certainly the case for the modder that decided to bring two of the biggest franchises together. God of War came screaming into our lives in 2018 and blew the gaming community away. The new rehashing of one of the best PlayStation franchises was more than well-received. Now, a fan of the game has turned God of War into a Simpsons-fueled epic. You can see the video below:

A modder by the name of Omega Fantasy has hilariously placed Homer and Bart in the tumultuous relationship that featured Kratos and his son Atreus. This new God of War mod sees the world’s worst/best father take on the challenges of Norse mythology with Bart at his side. Instead of the ever-popular Leviathan ax, Homer is packing his Wonderbat. This bat is one of legend, as Homer concocted it from a tree that had been struck by lightning. Even more hilarious is the fact that this modder chose Homer’s biggest rival as Baldur aka The Stranger. Who is Homer’s biggest rival? None other than his nosey neighbor, Ned Flanders.

The above 16-minute-long video essentially takes the game through the prologue of the game, as we are reintroduced to Kratos and his son Atreus. Kratos and his son are mourning the death of Faye (Atreus’s mother). However, an unlikely stranger shows up to test Kratos, and an epic fight ensues. However, in this mod, Homer, Bart, and Flanders take on the role of these characters. Or vice versa depending on if you’re Team Flanders. Honestly, being a superfan of both these franchises, this video is hilarious throughout. Granted that the voice acting can use a little work, it’s still fantastic. It’s not like Omega Fantasy could call up Dan Castellaneta and ask him to voice Homer. That would cost a lot of money, and Fox would not allow it. Pretty sure God of War might be more lenient with allowing this to happen. The plot of the game centers around a tough father and son relationship. And what better example is there than Homer and Bart. They are always at each other’s throats, literally.

What makes this mod even better is that the models for Homer, Bart, and Ned Flanders were brought over from the ever popular The Simpsons: Hit and Run game. So, God of War, The Simpsons, and The Simpsons: Hit and Run have all blended to make this arguably the greatest crossover that has ever been created. For fans of PC, we would say the mod needs to be downloaded immediately. God of War was released in 2018 and became one of the biggest video games of all time. The Simpsons are the longest-running show on TV. It makes sense that these two epic franchises would meet at some point. Can we get this mod transferred over to PS5 now? Please? 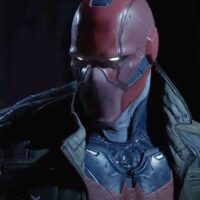