We have had some idea what to expect from Star Trek: Prodigy. The animated series could bring a lot to the greater universe of the franchise. Now, we have a clearer idea with its first trailer.

The trailer for Star Trek: Prodigy was shown at Paramount+’s panel at San Diego Comic-Con @ Home. We got to see the alien protagonists as they discover the U.S.S. Protostar ship. They take the ship to go on their own voyages. Turns out, taking the vehicle has activated a hologram of Captain Kathryn Janeway (voiced by Star Trek: Voyager‘s Kate Mulgrew). The team grows together and learns to survive as they go on cosmic adventures.

When taking a look at Protostar, its registry starts with NX instead of NCC. This means the ship these young travelers have stumbled upon is not a commissioned starship, but rather something more experimental in Star Trek: Prodigy.

Mulgrew has not appeared for 20 years since the finale of Voyager. She spoke during the Comic-Con panel about returning with Star Trek: Prodigy, bringing it to a new generation, and what makes the franchise special as it has transcended generations of fans. She believes that kids will embrace the ever-growing universe that is continuously being built on both the small and big screens.

“After a moment’s deliberation, I thought, what could be better than possibly handing this to the next generation, to a demographic that heretofore has not known anything about Star Trek — the beauty of it, the philosophy of it, the depth of it, the hope and the promise of it,” she said. “If there’s any age group that is going to take this thing and embrace it with a wholeheartedness not seen before, it’s the young kids.”

“We wanted to be that little brother, little sister that smacked the bigger sibling and says don’t underestimate us,” Hageman said.

After showing off Star Trek: Prodigy, a look at season two of Lower Decks, compared to the more family-friendly show before it, this is a more mature animated series for the franchise. It picks up right where the previous season left off with Jack Quaid‘s (The Boys) character Ensign Boimler on the U.S.S. Titan with Captain William Riker, played by Jonathan Frakes (Picard, Insurrection, Generations, Nemesis). Meanwhile, Ensigns Mariner, played by Tawny Newsome (Space Force), Rutherford, played by Eugene Cordero (Kong: Skull Island), and Tendi, played by Noël Wells (Master of None), travel on the U.S.S. Cerritos. Two Trek veteran guest stars will be featured with Jeffrey Combs (Deep Space Nine, Voyager, Enterprise) as an evil computer, and Star Trek: Voyager star Robert Duncan McNeill will return as his iconic role as Lt. Tom Paris.

Initially, it was set to release on Nickelodeon. Now, Star Trek: Prodigy will release on Paramount+ like the other Star Trek shows this fall. Once it wraps its 10 episodes on the streaming service, it will hit the children’s network. Meanwhile, the next season of Lower Decks will be on Paramount+ on August 12. 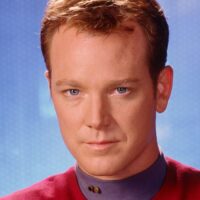