Dave Filoni, one of the most acclaimed and beloved Star Wars creators, has spoken up about the future of the franchise.

Dave Filoni is one of the most beloved creative figures in the entire Star Wars franchise, and his influence is only getting greater by the year. Dave Filoni is particularly known for his work on the various animated Star Wars shows and creating (or co-creating) fan-favorite characters like Ahsoka Tano, the Grand Inquisitor, and Baby Yoda himself, Grogu. In a recent video interview with Entertainment Weekly, Dave Filoni responded to concerns that the upcoming glut of Disney+ Star Wars shows would lead to them becoming pretty much all the same. Check it out:

The Entertainment Weekly interview features Dave Filoni along with Jon Favreau. The two have collaborated on a number of Disney+ shows, with The Mandalorian and The Book of Boba Fett being created by Jon Favreau and executive produced by Dave Filoni (along with a number of others including Lucasfilm head Kathleen Kennedy). As such, Dave Filoni and Jon Favreau have a great deal of experience in this current phase of Star Wars and are well qualified to comment on its future. Here is what Dave Filoni had to say about the direction Star Wars is moving:

We love seeing the development of all these series and how from the new show we’re doing with Jon Watts, Skeleton Crew, and… but when you look at Andor and you look at Obi-Wan, you look at Mando, you look at Boba. They all do have a different feeling, a different tone, and I think that’s remarkable, and really speaks to the serialized nature of Star Wars, and how it can be a very flexible galaxy. I mean, it is a galaxy, so there’s so many stories to tell that it’s exciting. But I don’t know yet. I’m waiting to see a little more as I put together what that tone becomes, because it’s evolving right now. It’s evolving.

All pretty fair observations, Dave Filoni. While it could be argued that The Mandalorian and The Book of Boba Fett are primarily different not in tone, but in that the former is pretty good and the latter is not so much, it is definitely true that the Star Wars universe is evolving in terms of storytelling. In recent years, Lucasfilm has increasingly been relying on the Disney+ platform to release streaming shows based on the franchise. It is likely due to the lukewarm critical and commercial reception of The Rise of Skywalker that Lucasfilm has turned to serial narratives, rather than feature films. As one of the most important people in the previous animated serial shows, Dave Filoni is definitely at the forefront of understanding where the future of the franchise will lie.

The next Dave Filoni Star Wars is Ahsoka, which was jointly developed by him and Jon Favreau. It will feature Rosario Dawson as the live-action version of the character, who has been a fan favorite since introduced in 2008’s The Clone Wars. In addition to co-creating Ahsoka, Dave Filoni will voice Chopper, a droid who has frequently popped up as a minor character in other Star Wars projects.

As George RR Martin recently opined, Star Wars is one of the franchises that currently seems as despised by its own fans as it is loved. Dave Filoni is one of the more adored Star Wars creators out there, in large part because of his storytelling and characters during the long drought of films between the George Lucas prequels and the Disney sequel trilogy. Hopefully, Star Wars fans can find it in themselves to trust him a little bit longer and evolve along with the franchise. At least for now, they have a whole slew of new shows from a galaxy far, far away to keep them occupied. 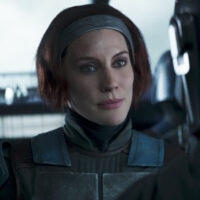 Katee Sackhoff Knows How The Mandalorian Will End