It had initially appeared that Star Wars was set to move past the Skywalker Saga with the conclusion of The Last Jedi and Rise of Skywalker, but things took a shocking turn back to that timeline. The Mandalorian, Book of Boba Fett, and Obi-Wan Kenobi are all taking place at some point in that timeline. Daisy Ridley, who portrays Rey during the final three films in the Skywalker Saga, was recently asked if she would ever return to that universe. Ridley had a very simple yet poignant response, “never say never.” Now, during a recent red carpet interview, she’s added a bigger tease to her potential return.

With how the Skywalker Saga had ended, it appeared as if Rey would take on the mantle of Jedi Master and go on to teach the young force users how to hone their gift. At the very least, she would do her part in resurrecting the Jedi Council, though there doesn’t seem to be too many Jedi left in the world. That’s likely where the new class of Jedi comes in. Daisy Ridley also had a response that might leave fans teeming with anger. While on the red carpet of the BAFTA awards, Ridley said, “I’ll always be Rey.” She knew that response would cause some controversy as she also yelled, “soundbite!” after. That is in response to Rey taking on and adopting the Skywalker name at the end of Rise of Skywalker, which left fans divided on the whole subject. You can see the red carpet moment below.

While the current state of Star Wars seems to be fully enveloped in the above-mentioned shows on Disney+, there have been no moves to further the mythos past the Skywalker Saga timelines. Quite frankly, there might not be much there. Daisy Ridley could return as Rey Skywalker, but who or what would be the threat? It seems that all or most of the Sith are gone as are the Jedi. Unless some sort of ancient evil is awoken or somehow some Sith Master was able to slink away unnoticed, it might be time to explore alternate timelines or return to the past before the Skywalker Saga took place. That seems to be the want from the fans, as many have called for a timeline centered around The Old Republic.

Nothing has been set in stone about how the next film, though both Patty Jenkins and Taiki Waititi, are presumably the next in line to direct. Jenkins’ film is called Rogue Squadron and is centered around Rebel pilots fighting their way against the Empire. The film is likely to be centered around X-Wings and Tie Fighters. Waititi, however, has not yet divulged as to what his Star Wars film would concern. The consensus is hoping that the timelines are going way back to the time before the Jedi Council was even formed. Whatever happens, it doesn’t seem like either of these films or directors would involve Daisy Ridley.

Fans of Rey and Daisy Ridley might have to wait sometime before she could or would return to Star Wars. Rian Johnson, who directed The Last Jedi, is also allegedly working on a new saga. This might be the time in which Ridley might return, though there is nothing set in stone. At least she understands the humor in returning to the role and claiming that she will always be Rey. I mean, she will. 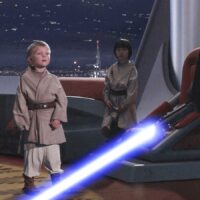