If detractors were thinking that public and social media backlash from a certain contingent of folks was going to be enough to have Gina Carano pivot her personal brand of antagonism, think again. The actress has faced considerable scrutiny over the last year-plus with how she’s approached messaging in and around the pandemic and other politically-charged conversations in the United States. Heck, she even got fired from a major production because of things she’s posted on social media. It doesn’t matter. She believes what she believes and is happy to let folks know about it. Recently, she took to Twitter again to blast out at those who have called her messaging “dangerous”.

Though she doesn’t outright acknowledge it, the post from Gina Carano appears very much vaccine-related. In this way, she didn’t leave much in the way of a gray area here, wanting folks to know that she doesn’t consider what she says on Twitter (or Instagram) dangerous at all. In fact, it appears she sees it very much the opposite with a reference to some possible side effects of the Covid-19 vaccine itself. Check out Carano’s post:

If there was “concern” about Gina Carano changing paths or pivoting from her current line of messaging around the pandemic, one needn’t worry. She is sticking to her guns on this one and in terms of cancel culture, there doesn’t seem to be much leverage from the latter’s side. Gina Carano has butted up against some of the terms and conditions on social media sites already. And again, lost a job in one of the biggest franchises out there because of things she had to say about the pandemic and political discourse in general.

Back in February, Gina Carano was fired from her role as Cara Dune in The Mandalorian after a string of social media posts that, at the time, were considered controversial. This had followed months of build-up for Carano with many wondering if her role on the show was secure. Her increasingly polarizing messaging had rubbed a certain contingent of fans the wrong way and there was word that Disney was facing pressure to have her removed in order to avoid the budding controversy.  Things reached a head when Carano posted a comparison to the treatment of Jews leading into the Holocaust with the tone around modern-day Republicans. This ended up being the proverbial death knell for her time on The Mandalorian and she was fired.

It didn’t take long for Gina Carano to land another gig, signing a production and acting deal with The Daily Wire almost right away. She is currently filming one of those movies, Terror on the Prairie, and was able to post a picture of her and some co-stars with their own little message for the audience. Plus, she weighed in again on other vaccine-related topics last week with the decision from the FDA to recommend vaccines for a new cohort. Again, Gina Carano has a lane here and she’s sticking to it. Unlike her previous work with Disney, these Tweets aren’t likely to land Carano in any kind of employment hot water. 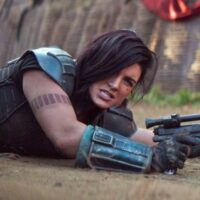 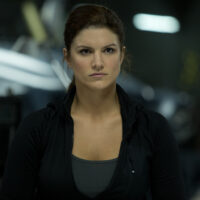