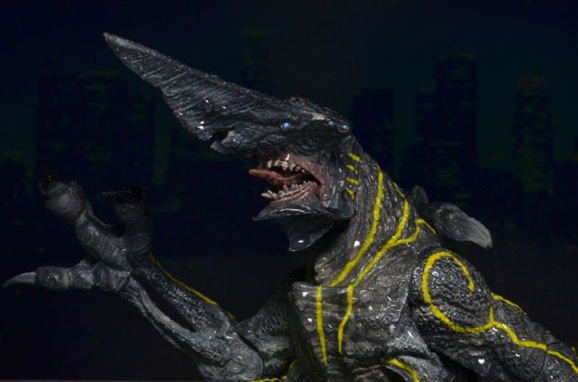 Guillermo del Toro’s Pacific Rim is still more than a month away. I know, I know, it seems like it’s been almost here for months. And if you think you’ve seen an excessive amount of promotion, you haven’t seen anything yet. We’re going to spend the month of July up to our eyeballs in merchandising, marketing, and, perhaps most importantly, toys, toys, toys. If you’ve been paying attention, you’ve probably seen the big Knifehead Kaiju, one of the giant monsters from the movie. Now toy manufacturer NECA has unveiled a miniaturized version of the terrifying creature you can claim as your own.

This figurine is seven inches tall, and is part of their first series of Pacific Rim toys, a set that also includes Jaegers Gipsy Danger and Crimson Typhoon. Now you, and all your nerdy little buddies, can get together and stage scale-model reenactments of the film. I’m not much of a toy collector, but these do look pretty damn awesome. If nothing else, the level of detail and that nasty, snarling mouth should make you even more excited for the movie to open on July 12.

In the future of Pacific Rim, there’s a rift between dimensions at the bottom of the ocean. Through this passageway, the Kaiju emerge to wreak all sorts of havoc on human civilization. To combat this latest threat to our survival, scientists unleash the Jaeger Program, a series of skyscraper-tall robots, to fight back. Two pilots working in unison, their minds linked, control these mechanical monsters. Even though we’ve evened the playing field a bit, this is still a losing battle. Just when things are the most dire, a pair of unlikely heroes emerge. Raleigh Becket (Charlie Hunnam) is a washed-up pilot, and Mako Mori (Rinko Kikuchi) is an untested rookie. Together, they must lead a legendary but outdated Jaeger into one last stand for the species.