“Cute” isn’t ordinarily a word I’d use to describe dinosaurs. Remember that one from Jurassic Park that coos sweetly at Newman, just before eating his face off? For a second I thought that little guy was cute, but I’ve since learned my lesson. Or so I thought. I just learned about a tiny little tyrannosaur that is, as the kids would say, totes adorbs.

The Nanuqsaurus, thought to roam the Earth approximately 70 million years ago, has a few distinguishing features. First off, it was only about 22 feet long. What? Is that not small? The usual T-Rex was about 40 feet, so this guy’s a veritable dino-dwarf. What’s more, its remains were found in Alaska, well north of the Arctic Circle. Yep. This cold-blooded cross between a polar bear (nanuq) and tyrannosaur apparently dug the cold. I hear it was pretty fierce at slopestyle, too.

Scientists, who published their findings in Plos One, think the difficulties of finding food in the Arctic account for the small stature. There’s not a whole lot of large prey in the Arctic. It’d be pretty hard to feed a full size T-Rex in a place where it’s pitch black six months of the year. Alaska is thought to have been warmer way back then, with lush and bountiful summers, but it still would have had to adapt masterfully to those environs. And speaking of adapting to a tough environment, how do you think cats would have fared back in the age of the dinosaurs? I’m not talking saber-tooth tigers, but your average everyday house cats. Probably not something you ever thought of, is it? But you will now, thanks to Bangkok, Thailand’s We Are Camera Studio.

They remade that awesome kitchen scene from Jurassic Park, in which the world’s most annoying kids try to escape a couple of velociraptors without rattling too many pots and pans. I initially didn’t expect much out of this video, but I was happily mistaken. This pair of super-huge cats stalk Tim and Lex and I wanted them to succeed in catching those whiners more than ever. I’m pretty sure Malcolm would agree. 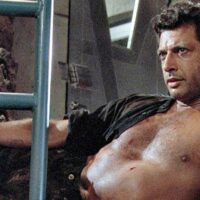