Sadie Sink joins the cast of Jordan Scott's Berlin Nobody.

Stranger Things actress Sadie Sink is going from one mystery-filled thriller to another, according to Deadline. The 20-year-old actress just joined the cast of Berlin Nobody, the latest film from writer/director Jordan Scott, daughter of acclaimed director Ridley Scott. Sink replaces Kiernan Shipka (Netflix’s Chilling Adventures of Sabrina), who had recently dropped out of the role. Production on the film is now underway this week in Berlin, which was convenient for Sink, as she was just at the Venice Film Festival in Italy, where she made waves on the red carpet.

Berlin Nobody stars Eric Bana (Hulk, Munich) as an American social psychologist named Ben Monroe, who investigates a local cult connected to a disturbing event. Meanwhile, his rebellious teen daughter Mazzy (Sink) becomes embroiled with a mysterious local boy (Jonas Dassler). The film will also star Sylvia Hoeks (Blade Runner 2049) and Sophie Rois. The film will be the second feature film to be directed by Jordan Scott, whose first film, 2009’s Cracks, starred Eva Green and Juno Temple. The film is inspired by Nicholas Hogg’s novel Tokyo Nobody, released in 2015 and was named one of the Best Books of the Year by The Observer. Ridley Scott and Scott Free Productions will produce the film. A release date has not been announced, but is expected to be sometime in 2023, when Sink will be in the thick of shooting the new season of Stranger Things.

Sink has seen her career skyrocket since she joined the Stranger Things cast as Max in 2017 for season two. Prior to that time, her biggest role had been in the 2015 NBC series American Odyssey, which only lasted a single season. She also had one-off roles on The Americans, Blue Bloods, and The Unbreakable Kimmy Schmidt. After Stranger Things, roles have come pouring in, including appearances in all three films of Neflix’s Fear Street trilogy. Her newest film, Darren Aronofsky’s The Whale, has won rave reviews after its premiere this weekend at The Venice Film Festival. In particular, star Brendan Fraser is getting Oscar buzz for his performance, which received a six-minute standing ovation from the Venice crowd at the premiere. The response brought Fraser to tears, as he thanked the crowd.

Sadie Sink is a native of Brenham, Texas, but made her mark early on Broadway. She appeared in the play The Audience, playing a young Queen Elizabeth II. Helen Mirren also appeared as the older Queen Elizabeth. Television and film roles followed, and after her breakthrough role on Stranger Things, she has kept busy, and not just in acting. Her stunning red hair and piercing blue eyes gave her the opportunity to be a spokesperson for Armani Beauty, who recently promoted her appearance in Venice, where she featured their makeup products.

Filming of Berlin Nobody will not affect Sadie’s role on Stranger Things. The fifth and final season is currently being written, and filming of the series’ eight episodes is not expected to begin until sometime in 2023. It has a projected release date of summer 2024, although an official announcement from Netflix has not been made. 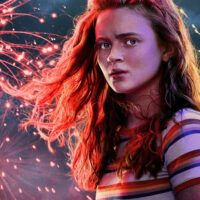