By Doug Norrie and Staff

In the summer of 2018, LeBron James signed with the Los Angeles Lakers in a move that many thought ushered in the twilight of his career with the idea that he’d transition to movies and other Hollywood ventures sooner than later. The speculation around movies becoming his primary focus rather than basketball was in large part predicated on the upcoming production of Space Jam 2.

Back in 1996, the world’s most recognizable athlete, Michael Jordan starred in a movie that really should never have worked. Space Jam was a live-action/ cartoon mash-up about a group of Looney Tunes characters and Jordan himself playing basketball to decide the fate of the universe. If it sounds stupid, well it was, but that didn’t stop it from rocking $230 million dollars at the box office and becoming somewhat synonymous with athlete/ movie crossover projects.

Now more than twenty years later, LeBron James will take up the intergalactic hoops mantle against the Monstars with a new crew of guys running rock with him in Space Jam 2.

First Look At LeBron James In His Tune Squad Uniform

We just got our first look at LeBron James geared up and ready to compete for the Tune Squad in Space Jam 2: A New Legacy. Here he is…

For comparison, here’s Michael Jordan in his much more simple, straightforward Tune Squad uniform in the original Space Jam…

Star LeBron James was the first to reveal the full title for Space Jam 2. And, of course, it’s not actually being called “Space Jam 2” because for some reason no one likes to use nice, simple numbers anymore. Here’s LeBron’s reveal…

So it’s actually being called Space Jam: A New Legacy, which is the kind of title you might expect LeBron James to come up with himself, if they let him. And given the kind of pull he has, the probably did let him come up with it. It feels like James is serving notice to Michael Jordan, and given the size of basketball players egoes, he probably is.

We know surprisingly little about the plot of Space Jam 2. While there’s been plenty of speculation and even thought pieces on how things should go, the film has gone through rewrites and some production turmoil. The Monstars appeared in a Nike-released promotional ad so we know they are at least coming back as the villains.

To be honest, there probably aren’t too many different directions for the plot of Space Jam 2. It will involve LeBron James and company playing basketball with other Looney Tunes characters and likely culminating in some kind of final game. While I doubt it’s a 1:1 remake, having many of the same plot points wouldn’t be all that shocking.

The Team In Charge Of The Sequel

Malcolm D. Lee took the reigns as director over as Space Jam 2’s director the summer after Terence Nance walked away from the project in the 11th hour. Lee’s film work is a mixed bag with flicks like Barbershop: The Next Cut, Girls Trip, and Undercover Brother receiving mostly positive reviews from critics. But there’s also Night School, Scary Movie, Soul Men and Welcome Home Roscoe Jenkins which didn’t fare nearly as well. For better or worse, his resume is mostly comprised of silly movies though so this latest does fit right in from that respect.

When you consider how long Space Jam 2 has been in the works, and how many leadership changes, rewrites and even delays it’s gone through I suppose there are reasons for some pessimism. But Lee at least has some legitimate works under his belt.

The Actors Of Space Jam 2

With any animated movie, even one like this, there really isn’t that big a need for actual on-screen talent who aren’t going to hoop. But we do know Don Cheadle is the biggest name attached to the film (not named LeBron James). Cheadle isn’t credited with a character though so it’s unclear what role he’ll play.

Additionally, Sonequa Martin-Green, probably best known for roles on The Walking Dead and Star Trek: Discovery, also has a feature role. IMDB credits her character with the name Savannah James which could mean she plays a member of LeBron’s family (wife or sister maybe?).

One of the weirder rumors swirling around this production is that Jim Carrey’s zany character from the 90s movie The Mask will appear in Space Jam 2. Though based on a Dark Horse Comics character, The Mask was basically a real-life Looney Tunes character, so there’s some tenuous connection there.

Word is that The Mask will show up as a referee during one of Space Jam 2’s basketball games. Carrey is not expected to play the character, not physically anyway. They’re cooking up some kind of CGI re-creation of him. The good news is that even though Carrey won’t physically be playing The Mask, he is expected to show up and voice the character.

Players And Other Talent

One of the highlights of the original Space Jam was how many big-name NBA stars shared the screen and court with Michael Jordan. I mean, they got their talents stolen as part of the plot, but those guys included: Larry Bird, Charles Barkley and Patrick Ewing along with a number of other players whose names rang out a bit louder at the time (but less so now) like Larry Johnson and the diminutive Mugsy Bogues.

For Space Jam 2 there are a number of NBA stars attached as well. The Warriors’ Klay Thompson and the Blazers’ Damien Lillard will join James’s Laker teammates Anthony Davis and Kyle Kuzma on the space court. Will they actually play ball or just act as a means to give LeBron time to shine?

And a welcome addition this time around will be members of the WNBA who’ll also take the court against the Monstars.

It’s also worth mentioning here that, since this is still a Looney Tunes adventure, we’ll almost definitely get the likes of Bugs Bunny, Porky Pig, Daffy Duck, Road Runner and a bunch of other characters that may have well jumped the shark.

And finally, given the nature of R. Kelly’s recent legal troubles and the world discovering that he’s just generally being a terrible guy, I doubt we’ll get an “I Believe I Can Fly” reprise. But you should be floored if some big music wasn’t attached to a soundtrack.

In addition to the Monstars it seems like we’ll be getting other villains in Space Jam 2 as well. Specifically villains taken from movies of the past. The following leaked video shows Joker, The Mask, and Voldemort all in Space Jam 2. It’s real! Check it out…

In addition, leaked images from Space Jam 2 and show the Joker, Pennywise, the Wicked Witch of the West, and The Mask all in the movie. Take a look…

Various sources have reported that Warner Bros. is trying to get Robert Pattinson to appear in the movie as Batman. Now word is that they’re trying to get Henry Cavill to appear as Superman too.

Both Superman and Batman’s appearances are likely to be just quick cameos. Maybe they’ll swoop in and dunk a ball or something. But if they’re back it’s safe to assume there may be other cameos we don’t know about yet too.

If you’re chomping at the bit for Space Jam 2, you’re going to have to wait a while. Though principle photography has already been completed, this thing is still a ways off. The movie’s official release date isn’t until July 21, 2021. On that date it will be released simultaneously in theaters and on streaming through HBO Max. 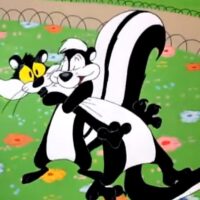