Oscar Isaac is gearing up to play what could be a major character in the Marvel Cinematic Universe with a new series coming out this year. But just because you are set to make a turn as one hero doesn’t mean folks can’t take the time to imagine you as another. Such is the way of the comic book movie and series landscape these days. With so many folks moving in and out of parts, it’s always cool to get a peak at what a different casting decision would have looked like. That was the case recently with some art depicting Oscar Isaac as Spider-Man.

The latest art comes via Jeremy Verburg on Twitter who has an account mostly dedicated to things related to the web-slinger. This pic is an up close look at Oscar Isaac in the role, appearing a bit older and with some more stubble than we are used to seeing Peter Parker on the big screen. I think it mostly works as an aged iteration of the character, a bit different than most other recent representations which has the wall-crawler battling out the high school scene while also taking on villains. Check it out:

Look, are we going to get Oscar Isaac as Spider-Man anytime soon? Of course not. That’s not the point of these exercises. But with the proliferation of the Multiverse in the Marvel Cinematic Universe, we do know now that just about anything is possible. From the establishment of the What If…? series on Disney+ that flips the script on time-honored storylines to what we saw in Loki and Spider-Man: No Way Home, we know nearly anything is possible now. It opens up whole new worlds and iterations of characters that we never would have gotten before. It’s a cool prospect even if it can be tough to keep track of it all.

So, Oscar Isaac as Spider-Man? No. But he is coming to the small screen as another Marvel character sooner than later. That’s because he’s set to star in Moon Knight on Disney+. He will be taking on the role of Marc Spector who becomes the Moon Knight, imbued with powers from an Egyptian god, and becomes something of a vigilante. By many early accounts, this is going to be one of the darker/ more harrowing series we’ve seen on the streamer with Moon Knight trending a bit more violent than other series.

In addition to Oscar Isaac, Moon Knight will also feature the debut of Ethan Hawke in the Marvel Cinematic Universe. Hawke is set to play the villain/ antagonist in the series though it hasn’t been officially confirmed exactly what role he is taking on. The best guess so far is that he will be playing Sun King. This character can control fire and was a former mental patient-turned-cult leader in the comics. It lines up with what Ethan Hawke has said in the past about the inspiration for his character.

Oscar Isaac will premiere Moon Knight at some point this year on Disney+ with the series running for six episodes on the streamer. So there is no Spider-Man in his immediate future, but plenty more to get excited about for the actor. 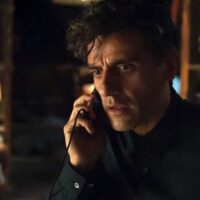