Jason Momoa is known for playing indestructible characters on screen, from Aquaman to Khal Drogo in the first two seasons of Game of Thrones, but in real life, he’s only human. The actor is set to star in the sequel to 2018’s Aquaman and says he took quite a few hits while filming the movie. During an appearance on The Ellen DeGeneres Show, Jason Momoa revealed that reprising the role hasn’t come without some risks. When asked about rumors that he’d hurt himself while filming, the actor confirmed he sustained quite a few injuries. Why? He says it’s because he’s getting old.

“I messed up my eyes. I just got something in it that kinda cut it up, and then I’ve gotta get surgery, I have a hernia, I’ve got ribs out. I’m just getting beat up,” Jason Momoa said. But he did reassure viewers that despite his personal setbacks Aquaman and the Lost Kingdom is going to be a great movie that fans will love.

When Ellen DeGeneres asked if he can see with his scratched cornea, Jason Momoa replied with a lighthearted, “Yeah, yeah, look at me. I can see great. I’m good to go!” While he was open to discussing the injuries, he also downplayed them as being fine. It does sound like he has taken quite a beating, which isn’t surprising since the star largely works in roles that require a lot of stuntwork and physicality.

Referring to the DC star’s many past injuries (which include a broken femur and a face injury that left a scar) Ellen DeGeneres expressed concern about the harrowing nature of the roles he takes on. However, in true superhero fashion, Jason Momoa just shrugged it off, explaining that he just gives it his all when doing a movie. “I just kind of give it, yeah. I love my job and I get a little too excited, then the age thing, you know, I’m an aging superhero right now.”

Jason Momoa became a household name after landing the role of a lifetime as DC superhero Aquaman. The 2018 film grossed more than $1 billion, making it the only DC film to reach that number, aside from Christopher Nolan’s The Dark Knight trilogy. The story followed Arthur Curry/Aquaman who sets out to lead the underwater kingdom of Atlantis and stop his half-brother, King Orm, from uniting the seven underwater kingdoms to destroy the surface world.

While there are no official plot details for Aquaman and The Lost Kindom, James Wan is set to resume directing duties with David Leslie Johnson-McGoldrick returning to pen the script. Wan is also producing alongside Peter Safran. Production on the project began in July this year.

The film will see Jason Momoa reprising his role as Arthur Curry/Aquaman alongside Amber Heard as Mera and Patrick Wilson back as Orm. Other returning cast members include Yahya Abdul-Mateen II as Black Manta as well as Willem Dafoe, Nicole Kidman, and Dolph Lundgren.

During the Aquaman and the Lost Kingdom panel at DC Fandome, James Wan said people are going to be in for a treat when the film is released. He explained that fans are going to get a more mature movie that still retains its fun. The director, well known for his horror works, says that the sequel will be much darker. In a surprising detail, he said that he is pulling a lot of inspiration from Planet of the Vampires. So audiences can expect to see something different, something new, and something they haven’t seen before.

Aquaman and the Lost Kingdom is scheduled for release on December 16, 2022. 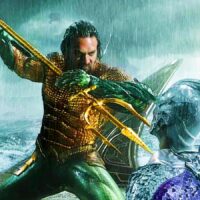