What an awesome cameo!

James Gunn is undoubtedly one of the best things to happen to the DC Extended Universe of movies and TV series, and the upcoming third season of the hilarious Harley Quinn definitely seems like they’re taking advantage of that fact. The director gets his own cameo and animated counterpart in the Season 3 trailer. Gunn himself took to Twitter to post the trailer and hype up the upcoming episodes. Take a look at the Tweet below:

Though James Gunn isn’t involved with the Harley Quinn show on the creative side of things, the animated comedy is definitely in his wheelhouse. In fact, Harley Quinn was bringing fun, raunchiness, and zany antics to the DCEU before James Gunn even got his hands on The Suicide Squad in 2021. Harley Quinn follows the titular villain after she breaks up with the Joker and forges her own identity as a top villain in the DC lineup. The third season sees the newly formed couple of Harley and Poison Ivy returning to Gotham after their “Eat. Bang! Kill. Tour.” The third season will continue to explore the budding romantic relationship between the two while also working on Poison Ivy’s plan to turn Gotham into an Eden-like paradise. And judging by the trailer, we’ll also get to see James Gunn sit on Clayface’s face at some point.

With his work on Harley Quinn all finished up, James Gunn will be keeping plenty busy working on superhero (and villain) business of all kinds for both DC and Marvel. His spin-off from The Suicide Squad, the John Cena-starring Peacemaker, was confirmed to be getting a second season earlier this year. The show had a surprising amount of heart along with the typical James Gunn-style humor, making it quite the hit on the HBO Max platform. Meanwhile, Gunn is working on another spin-off for DC based on the ARGUS director Amanda Waller. 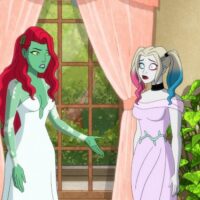 The Fate Of Harley Quinn On HBO Max Has Been Decided

Suicide Squad To Crossover With Scooby-Doo?