It looks like Gwyneth Paltrow is ready to give up her acting career. Following up on what she announced back in 2016 when she told the Today Show that she was taking a break from acting to focus on her lifestyle company Goop, Paltrow explained there’s only one way she sees herself jumping in front of the camera again.

“I would have to be f—ing the writer!” Gwyneth Paltrow said jokingly to Campbell, who nearly fell from her seat. “If my husband writes something and he wants me to do it, then I’ll do it … And you know, I can never say never.” However, Paltrow did say “I’d like to go back on stage one day,” she said. “I really loved doing theater.”

Brad Falchuk is a writer, producer, and director and recently, Gwyneth Paltrow starred in The Politician, a Netflix series that was co-created, written, and produced by her husband. In it, Paltrow plays Georgina Hobart, the mother of the main character Payton Hobart (Ben Platt), a high school student who aspires to one day become the President of the United States, which informs his campaigns in school politics. The Politician has so far run for two seasons, but co-creator Ryan Murphy said the show could return for a third and final season after a long hiatus.

Gwyneth Paltrow seems to be right on course with the statements she made with Naomi Campbell. She has really stepped away from acting with Johnny Depp’s dud Mortdecai being her last starring movie role. She has appeared as Pepper Potts in Spider-Man: Homecoming, Avengers: Infinity War, and Avengers: Endgame, but other than those quick appearances, The Politician has been it for her.

Her main focus has been Goop, which Gwyneth Paltrow launched in 2008 as a simple weekly e-mail newsletter that was intended to give new-agey advice. Its popularity allowed Paltrow to grow the brand, as she was able to team up with fashion brands that helped her company launch pop-up shops. Her growing success also allowed for a wellness summit, the launch of a print magazine, a podcast, and even a docuseries called The Goop Lab that premiered on Netflix.

It wasn’t only Goop that caused Gwyneth Paltrow to move away from acting. She’d been in the business for a long time, starting in 1989 and grabbing her only Oscar Award for Best Actress in Shakespeare in Love almost ten years later. But as she told Naomi Campbell, it seems as though she hasn’t liked. acting for quite some time. “I also started doing it so young that I just started and kept going and kept going. I went for a long time before I even asked myself, ‘Do I like this job? Am I comfortable doing this? Do I want to be an actor?’ It took me a while to even want to ask myself that question. [When I did] it was no!”

As long as Gwyneth Paltrow has Brad Falchuk in her life, there is still a good chance we’ll see her on the big or small screen, or maybe Marvel may call again. But she does seem confident and at peace with her decision. Of course, Paltrow does seem to be on the lookout for something that could get her back on stage. Until that time comes, Goop seems to be where we’ll find Gwyneth Paltrow.

If you’re willing to sit through it, the 45-minute conversation between Gwyneth Paltrow and Naomi Campbell can be seen below. 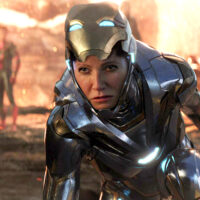