By Liana Keane | 1 month ago

Despite a lot of disagreement among fans about whether or not she’s actually any good at playing Captain Marvel, Brie Larson has become the centerpiece of the next phase of Marvel’s entertainment universe. Iron Man and Captain America are about to pass the Avengers torch to Captain Marvel and probably Spider-Man, and that means we’ll likely see both characters showing up in movies other than the ones with their names on them. According to our insider source, one of the first places that will happen is in Thor Love And Thunder, which we can now exclusively reveal will feature Brie Larson as Captain Marvel.

Our source confirms that Brie Larson is going to be in the upcoming fourth Thor movie. Thor Love and Thunder won’t take place on Earth and will, like Thor: Ragnarok before it, largely be a galaxy hopping adventure. Brie Larson’s Captain Marvel currently spends very little of her time on Earth and most of it running around the Galaxy saving other planets, so it makes sense that she’d have to show up in a planet-hopping outer space Thor adventure.

Brie Larson is, of course, not the only Marvel actor sharing the screen with Thor in the movie. Most of the Guardians of the Galaxy are now also expected to be in Thor Love And Thunder. Again, given that the Guardians spend all of their time doing things not on planet Earth, it makes a lot of sense to have them involved in an outer space Thor adventure.

Thor Love and Thunder is set to release mid-2022 before Captain Marvel 2 which means that it, not Captain Marvel 2, will be the next place you’ll get to see Brie Larson back as Carol Danvers. For that matter, it may be the next place you get to see Brie Larson on screen at all. She currently has nothing else on her schedule, aside from Captain Marvel 2 and now Thor Love and Thunder. As one of the new leaders of the Avengers, she’s going to be busy filming scenes for numerous Marvel movies, so it makes sense that she’s keeping her schedule clear. Robert Downey Jr. didn’t film a lot outside the Marvel universe while he was leading the team either.

That said, there have been rumors that Brie Larson might be in talks to join Star Wars or even become a kickass Disney Princess. For now though, those are all rumors.  Mark down Thor Love And Thunder as a sure thing though. Whether Brie Larson’s part in the movie is a major one or just a cameo remains to be seen. Our source couldn’t confirm just how involved she’ll be, only that she’ll be in it. 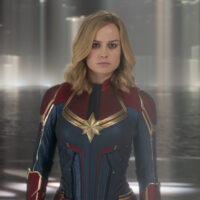