Andrew Lincoln To Return As Rick Grimes In The Walking Dead Final Season? See The Pic

With The Walking Dead set to wrap up its series run later this year, most fans want to know if Andrew Lincoln will be making a return as Rick Grimes. We last saw the dude during Season 9, but there has been confirmation that he is still very much alive in this universe. It hasn’t been a question of “if” he’ll make a return, but rather “when” with the latter looking more likely to come in movie form for the franchise. But it might be sooner and there is some recent evidence that we could see Rick Grimes sometime around the series finale.

Filming for the eleventh and final season of The Walking Dead has been happening in and around the Atlanta area recently and a post went up on Instagram that points to Andrew Lincoln being in the area with other cast members. Instagram user kingsuh1018, a chef in Atlanta, posted a picture to his feed of him posing with Andrew Lincoln and Norman Reedus. While this isn’t proof positive that Lincoln is on the set, it points to the idea that he’s in the area and hanging with former co-stars. That sure would seem like we are going to see him in The Walking Dead sometime in these final episodes. Check out the Instagram post.

So could we be seeing Andrew Lincoln back as Rick Grimes during this final season of The Walking Dead? It would sure seem that way if he’s in the area and hanging with Reedus. The second set of eight episodes of the series are aired starting on February 20th and will begin to wrap up the timeline for the remaining characters. It will conclude one of the truly great television runs, following the story of the survivors of the zombie apocalypse who are more trying to survive each other than outrun the zombie hordes. This might mean Lincoln will appear sometime in the final 8-episode chunk.

If and when Andrew Lincoln is introduced will be an interesting aspect of the story. He was last seen in season 9 when, to others in the show, it appeared he was killed in a bridge explosion. But viewers know that he was taken away by a helicopter and did actually survive. This has led to us knowing that he would return at some point in the franchise, though it was believed that would come when the show transitioned to a series of films after its run on AMC. But it looks like fans will get Rick Grimes back sooner. 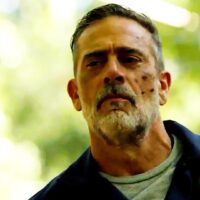