During the Super Bowl this past weekend, Disney debuted a new TV spot/trailer thing for their mysterious upcoming adventure Tomorrowland, but that’s not all they’ve unveiled. It’s only a small crack, but they’re opening up the Mystery Box a wee bit, and a couple of new stills and a fancy new interactive website have crept out.

We don’t know much about Tomorrowland, but as we understand it, the story revolves round Casey (Britt Robertson), a young girl with a bright scientific mind. When her destiny becomes entangled with Frank (George Clooney), a former boy genius who is now bitter and jaded, they unearth secret details of a place called Tomorrowland that exists somewhere out in space and time, and their journey will change both of them, and the entire world, forever. There promises to be no shortage of action, adventure, and wonder going down before the credits roll.

Thus far, the couple quick looks we’ve seen from the film offer even quicker looks at this magical world, which is precisely what these new stills show off. There’s a kind of magic pin that, when Casey touches it, it transports her from where ever she is to, well, somewhere else, somewhere we assume is Tomorrowland.

This is world where anything is possible, with a kind of retro-futuristic skyline that evokes images of classic, pulpy science fiction.

Like I said, we’ve seen these views before, but these are much sharper images, and they don’t flash by in a glimpse, so you actually have the opportunity to examine them in greater detail, which is nice.

In addition to these new photos, Disney teamed up with Google to deliver the new website TakeMeToTomorrowland.com. Right now there’s not a ton there except a countdown that still has more than 99 days left and a link to the Super Bowl spot, but eventually there will reportedly be a great deal more. Before the movie opens this spring, you’ll be able to explore an immersive, 360-degree rendering of Tomorrowland and its shiny futuristic landscape. For now, however, these photos will have to do. 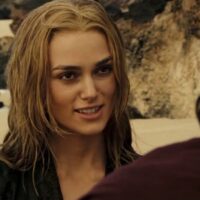