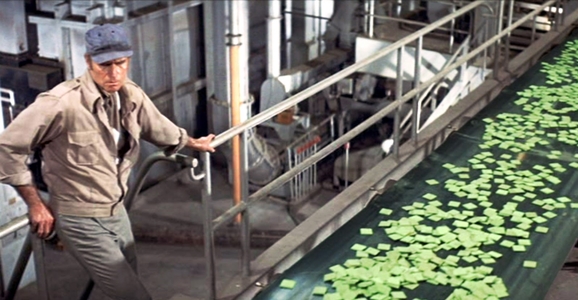 Soylent Green
I want to get this clear right out of the gate, I’m not lobbying for a Soylent Green reboot or remake or whatever label the studios would slap on such a rehash, and I’ll be the first one to decry it as unnecessary. Unless they can bring Charlton Heston back from the grave to star in it. That I could get behind: a zombified Heston shuffling around, moaning, “It’s people,” and chomping down on random passersby. It is an uneven film, to be sure, and there are some woefully underused plot elements, but the themes of industrialization, pollution, and corporate greed gone wild are still every bit as resonant today as they were so many decades ago.

Of all the various things I would want out of a remake of Richard Fleisher’s 1973 dystopian vision, there is one particular thing I desperately need to see. Granted, it was the early 1970s, and there were different rules in regards to human safety on a movie set, but when you watch those crowd scenes with the bulldozers scooping people up, it’s hard to imagine that people aren’t actually being mauled and injured. Maybe they were, maybe they weren’t, but that’s definitely the impression that comes across. It adds a visceral edge to the whole movie, a feeling of danger that gets you emotionally invested in the events on the screen. – Brent