Every piece of the Marvel Cinematic Universe is closely linked to every other one, which creates one massive, sprawling world where events in one title ripple across all the others, like how Captain America: The Winter Soldier helped make Agents of S.H.I.E.L.D. good. So when you kill a character in one movie, they’re dead in all of them. Guardians of the Galaxy added a few new wrinkles to the MCU, taking it out into deep space, but they almost did something that would have sent shockwaves through the entire program: they almost killed Stan Lee.

That was the plan anyway. You’re well aware that the Marvel Comics legend has a cameo in every Marvel movie, even the ones that aren’t really Marvel movies, and waiting for him to pop up is part of the fun. Sure, he plays a different character in each film, so you could totally get away with killing him off in one movie without impacting the rest of the world, but it might irreparably damage the psyche of fans out there.

In a recent Q&A with Jeff Goldsmith, Guardians director James Gunn laid out the original plan. Here’s what he had to say:

Originally, when they walked through, they come into the Collector’s museum, and they walk in there. And they’re walking up there, and we look over and we see Cosmo, who growls at Rocket. And if you’ve ever read Guardians of the Galaxy, Cosmo and Rocket don’t like each other. Cosmo’s a space dog. And then they look over here, and Quill looked into this box that was full of steam, and this tentacle shoots out, and he jumps back. And he’s embarrassed and he’s scared in front of Gamora. And then, we went to another box, and Groot looks inside it, and it’s Stan Lee just sitting there.

And we actually did two different versions. We did one where Stan Lee was just sitting there, and one where he looked at Groot and just gave him the finger. But it wasn’t really Stan Lee, because we were in England, and Stan’s an older gentleman, and he couldn’t make the trip. So we did it with a double. And then we were going to digitally replace his head with Stan’s head, which we were going to shoot later.

But we weren’t sure if we should add it. Kevin thought it was a little bit too jokey. And then also we very clearly saw Stan Lee’s box exploding, when the thing explodes. And I said, ‘Wouldn’t it be great if Stan Lee’s … these are the kind of ideas that I would come up with and Marvel would say I think that’s Super James Gunn … but Stan Lee’s head is rolling into frame.’ And anyway, so we didn’t do that. We’ve actually seen a photo of this double that came out a while back, and while we knew a broad description of the potential scene, we didn’t know they planned to off the beloved comic scribe.

It’s easy to understand why they didn’t go with this version, it’s not the same without him actually there, but Stan Lee’s head rolling into frame could have been awesome. The flipping the bird thing is a little overboard, especially with Star-Lord doing the same thing earlier. In the finished movie, Lee is credited as Xandarian Ladies Man, and shown hitting on some young alien women. While the original version would have been a bit too much of a detour from the main story, you have to wonder what could have been.

What do you think, should they have killed Stan Lee? In this same Q&A session, Gunn also reiterated that Guardians does not exist simply to serve the Avengers films and as a lead up to the two-part Infinity Wars. He said: 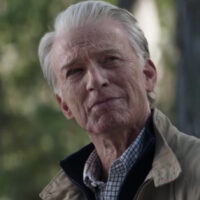