Take That, Kim Jong-Un, You Don’t Get To Be Star-Lord’s Dad 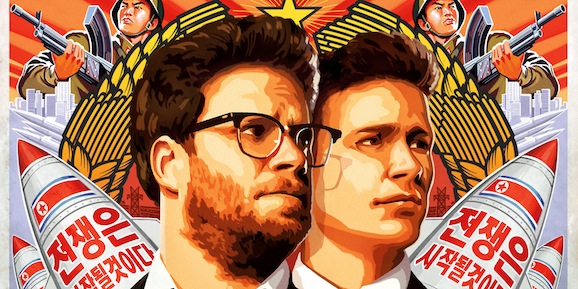 You may have noticed that over the last two days, the world seems to have lost its damn mind. The Sony hack that has been a hot topic of debate lately got all kinds of crazy, as that Guardians of the Peace group—the government has now confirmed that North Korea is in fact behind the hack—threatened terrorist attacks on theaters screening the Seth Rogen/James Franco comedy The Interview. First, all of the major theater chains decided they weren’t going to screen the film, and then Sony scrapped the entire release (I was supposed to see a screening tonight dammit). As it stands now, there are no plans to release it in any format, ever. Some places, like the Alamo Drafthouse, planned to show Team America: World Police in lieu of The Interview, but even those screenings are being cancelled now (Paramount is forbidding screenings because North Korea is in charge of Hollywood and a ten-year-old puppet movie is way too dangerous to show—it was on Netflix last time I checked), as have plans for a Steve Carell-fronted North Korean thriller.

If this all sounds like a dystopian novel to you, you’re not alone, as this feels like the start to one of those Hunger Games-esque young adult trilogies that are so damn popular. This situation raises all kinds of questions about censorship, international politics, and basically letting the bad guys win. (Seriously, if you were on Twitter or any social media last night or today, you saw things like Mitt Romney and Newt Gingrich making the exact same points as people like Michael Moore. This is what Peter Venkman yelled about in Ghostbusters: “Dogs and cats, living together.” It’s nuts out there.)

There are tons of intelligent, well-stated think pieces about this issue floating around out there, written by people who are way smarter and more knowlegable than I am. You can read those if you want to get into the specifics of this slippery slope we’ve found ourselves on.

But while this situation is deadly serious—hell, it involves terrorism, you don’t get much more serious than that—some have been able to find a more humorous outlet for their frustration. One of these people is Guardians of the Galaxy director James Gunn, who has always flaunted a twisted sense of humor. The question of who is Star-Lord’s (Chris Pratt) father in Marvel’s space adventure has led to much speculation, and while we don’t know who it will be just yet, Gunn let us know one person it won’t be: North Korean dictator Kim Jong-un.

The filmmaker took to Instagram to share the following image, a list of names of Peter Quill’s potential dads, with that possibility crossed off (is it weird that I really want it to be Howard the Duck?):

So we can’t go see The Interview on Christmas Day, we don’t even have the option as that choice has been removed from the equation. And just a heads up, if you were planning to download the movie from some file-sharing site, you might want to think twice. We know you’re all law-abiding citizens who would never ever think of acquiring a movie by less-than-legal means, but just in case you know someone who isn’t quite so upstanding, hold off on this one for a minute, because it’s probably chalk full of all kinds of nasty viruses. You—I mean your friend—could in fact be downloading a copy of The English Patient with malware embedded in it, and neither of those sounds like a good time.

At this point, we may never actually see The Interview, or even have the opportunity to. So fuck you, Kim Jong-un, you may have taken our movie, but you don’t get to be Star-Lord’s dad.