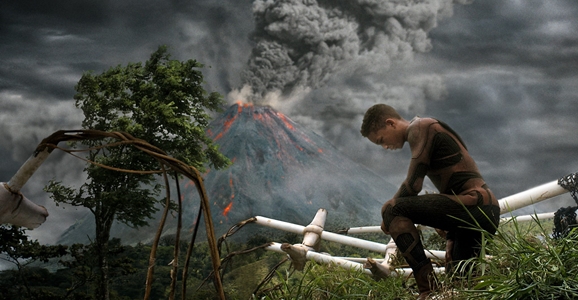 “Take A Knee.” Before the release of After Earth, I was excited, thinking that maybe the science fiction movie would be good. For some strange reason, I always root for M. Night Shyamalan to get back on track after Signs, his last good movie, though I’ve been terribly disappointed year after year. A collaboration between Will Smith and Shyamalan sounded like a good ides, so what went wrong? The answer is simple: a lot of things went wrong. Critics panned the movie and audiences decided to stay away. It was one of the worst movies of 2013, and was also nominated for six Golden Raspberry Awards, AKA the Razzies.

As last night’s ceremony in Los Angeles, After Earth “earned” three Razzies, including Worst Actor for Jaden Smith, Worst Supporting Actor for his father Will Smith, and Worst On-Screen Couple for the pair “on planet nepotism.” Needless to say, After Earth wasn’t the comeback movie Shyamalan or Smith hoped, as both once-big-name celebrities are waiting for a hit movie.

After Earth’s biggest sin was pawning Jaden Smith as a leading man and an action star. It’s no secret that Will Smith and Jada Pinkett-Smith are trying to launch their kids into super stardom, but have yet to find any major success. Although Jaden starred in the Karate Kid remake in 2010, which was a box office hit, the 15-year-old still has yet to prove that he’s a draw on his own, or even a competent actor with any modicum of screen presence. Sadly, Jaden doesn’t have much of his father’s charisma or talent.

While Shyamalan avoided a Worst Director “win” this year, he has received the award for The Lady In The Water in 2006 and The Last Airbender in 2010. While After Earth is a terrible movie, it’s actually a little bit better than those films.

Movie 43 beat out After Earth for the Worst Screenplay award, which was given to 20 writers, while the comedy also received the Razzie for Worst Director, given to 13 directors including James Gunn, Bob Odenkirk, Brett Ratner, Elizabeth Banks, and Peter Farrelly. After Earth did tie Movie 43 for the most awards with three Razzies at the end of the ceremony.

This was the fourth time that Shyamalan has been nominated for Worst Director, along with The Happening in 2008. He really needs to re-examine his career because it’s in dire need of help. The Sixth Sense and Unbreakable are legitimately good movies, but somewhere in his career something went drastically wrong. It’s hard to believe that he’s still making movies in Hollywood today after so many colossal critical and commercial failures.

With no signs that Will Smith will get his career back on track, it’s unlikely that he’ll ever see that same kind of success he saw with movies like Independence Day, Men In Black, and I Am Legend. After Earth could’ve been something special, but the movie’s potential was squandered on massive egos and poor performances.