Welcome to the jungle. We’ve got fun and games, like Robot Charades and airings of Jeopardy with IBM’s Watson on it. Providing today’s music is a power trio called Z-Machines, whose name is less a mystery than a confession in a bad French accent. Zeez are zee machines, namely three robots created by University of Tokyo roboticists, that are able to play music in ways humanity could only dream of. Z-Machines debuted last year during a live performance in Tokyo, and they’re taking it even farther by releasing an original EP next month, proving that metal, at least the scrap kind, will reign forever!

Music for Robots is the unimaginative but spot-on name for the five-song EP, which Warp Records will be releasing on April 8 (here in the States), both on CD and vinyl. Robot music on a record player is the most implausibly perfect thing I’ve ever heard of. The CD was programmed or composed or produced by famed British electronic musician Squarepusher, who teamed up with the roboticists and created a months-long venture into making music from the heart, as filtered through these three organ-less beings.

The album has songs with such names as “Remote Amber,” “Dissolver,” and “You Endless,” but you can check out the lead single, “Sad Robot Goes Funny,” in the video below. So it’s clear, no one should be surprised if I name a future child Sad Robot Goes Funny.

The guitarist’s name is March, and he has 78 finger-like things hitting his custom double-necked guitar in all kinds of areas, plus a head of “long hair” that he bangs around like he’s The Thing That Should Not Be. Then there’s the laser-pointing Cosmo, the keyboardist with a Carmen Miranda-ish set of electronics bursting out of its head. Finally, there’s Ashura, a drummer than can play four times faster than any human being, and which has 22 different arms to prove that fact time and again. It’s good that these guys don’t have genitals, egos, or coke-snorting nostrils, because there could be a bit of trouble if they ever go on tour. Luckily, their circuits are pure.

Z-Machines have got to be the coolest robot musicians that we’ve covered here on GFR, and here’s another song to prove it. Say hello (or goodbye) to “Hey Exit.”

If you want to check out more of these guys and see what they’ll be doing in the coming months, just head on over to their Facebook page. Maybe you can ask one of them for their automatonograph. 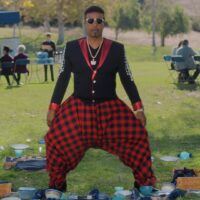