Woody Harrelson is fresh off appearing as an assassin in The Man From Toronto, but now he is set to transform into a 1970s rocker in his newest casting.

Fresh from his new Netflix release, The Man from Toronto with Kevin Hart, Woody Harrelson is in talks for a new film role. This time, the film is not a comedy spy caper double act, but an ensemble musical. Harrelson is in line to star in Sailing, a 1970s-themed musical from Lionsgate and Rock of Ages creator Chris D’Arienzo, as per Deadline.

Sailing will see Woody Harrelson feature in a story focusing on a group of musicians sailing aboard a Yacht that plays host to a Rock n Roll radio station, the ensemble of characters will encounter yacht rock, a beloved smooth rock genre that captured the airwaves in the 1970s. The premise of Sailing bears a resemblance to the Richard Curtis movie The Boat that Rocked, which centers on a British pirate radio station in the late sixties and was led by an all-star British cast and the late great Phillip Seymour Hoffman. The creative brains behind Sailing belong to the aforementioned Chris D’Arienzo, writer of the five-time Tony Awards nominated Rock of Ages, which he also co-adapted for the big screen although sadly, he was reportedly cut out from the adaptation early on, which was doubly disappointing as he was in line to direct the feature as well. D’Arienzo’s involvement in Sailing means the project has every possibility of being a success.

As well as being in talks to star in the movie, Woody Harrelson is also attached to the project as a producer. Harrelson is of course a Hollywood veteran of immeasurable talent and standing and marks a huge draw for Lionsgate to attract more cast members to Sailing, to fully flesh out their ensemble. Woody Harrelson is so far having a good year, with his acting endeavors being rewarded in several ways. He recently had The Man from Toronto debut on Netflix straight in at number one on the streamer and starred in this year’s recipient of the Cannes Film Festival’s Palme d’Or winning film, Triangle of Sadness.

However, despite still going strong decades into his stellar career, Woody Harrelson is set to experience something all veteran actors wind up facing in modern Hollywood, seeing their best work rebooted. For Harrelson, this is happening in the form of a reboot of the Spike Lee joint, White Men can’t Jump. The reboot will see rapper Jack Harlow step into Harrelson’s sneakers. Woody Harrelson will likely not be bothered by a reboot of his past works as he has several projects in post-production before suiting up for Sailing. Harrelson has two television projects and two feature films in the works, so he has plenty to keep him busy rather than dwelling on his classics getting a do-over.

Related:
See Woody Harrelson Be Captain Of A Yacht In Triangle Of Sadness

A comedic, 1970s-based rock musical set on the high seas and brought about by a Tony Award nominee is a potent formula and adding Woody Harrelson to the mix makes it even more so. Fans will be eager to see who else will join Harrelson in the Lionsgate movie, with the task of fleshing out an ensemble cast key to drawing in audiences and making a film such as this a success. 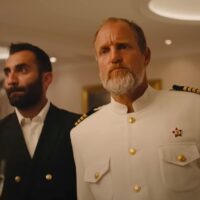